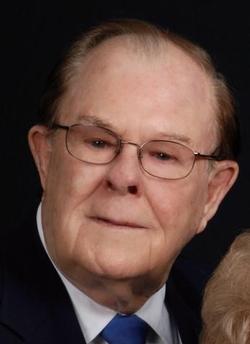 Cooper, Noel G. age 85 died Sunday, September 8, 2013. He was born June 11, 1928 in Elk City, OK. to Jesse Frank and Maggie Mae (Riley) Cooper. He married Anzetta, the love of his life September 26, 1953 and they have been happily married for 59 years. They were introduced by a friend in St. Louis and were married in Hoffman, IL. He attended school in Elk City, OK. He proudly served his country in the US Army during the Korean conflict. He worked as a medic in the Army Hospital in Okinawa, Japan from 1951-1953. He was an Optician and worked at Ostertag, Munday Optical and Lens Crafters. His hobbies include: Flower gardening, especially roses, Playing cards on Saturday night with neighborhood friends, being a part of a 30 year Bible study.
He was preceded in death by his parents, 3 sisters, 2 brothers and a nephew. He is survived by his wife, Anzetta; Daughter, Doris and her husband Lonny Mahan and their daughter, Erin Mahan; Daughter, Janet and her husband Larry Dockray and their children, Riley and Kelsey Dockray; Son, Craig Cooper; His very dear niece Shirley and her husband Larry Bellew and their children, Georgie Ann, Shannon, Mark and Ernie; and other nieces and nephews, Phil, Doug, Lori and Denise.
Visitation will be Wednesday from 9am to 8 pm with family receiving visitors from 6 – 8 pm. Viewing will also be at the church from 9:30 – 10:00am on Thursday.
Services will be Thursday, September 12, 2013 at 10:00 AM at the Lutheran Church of Our Savior 6501 N.W. 23rd St. Bethany, OK. Committal/Graveside will be at 2:30 pm at Fairlawn Cemetery, Elk City, OK.