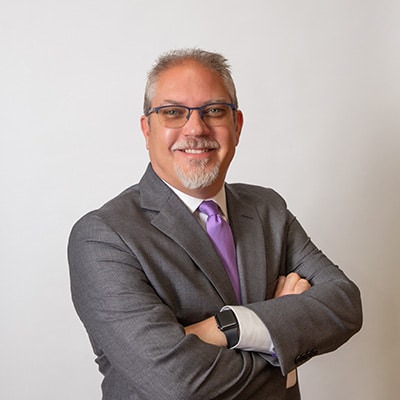 Ray was born in 1968 in Oklahoma City, Oklahoma, and has lived here all of his life. He graduated from Living Word Academy High School in 1986 and attended one year at Oklahoma Christian College. He then transferred to Central State University, now the University of Central Oklahoma, and completed his Bachelor of Science in Funeral Service in 1990. He became a licensed funeral director and embalmer in March 1991, studied and received his insurance license, and gained the much-needed knowledge to pass on the advantages of pre-planning to his friends and neighbors.

Ray met his wife Jana in 1987 at church and they were married in 1992. Without Jana’s support, this ministry would not have been possible. Ray and Jana’s two beautiful twin daughters, Katie and Kara, have both gotten married in the last year. Jana and Kara have worked together to make the funeral home look elegant. Katie is now in a full-time role as an administrative professional in the office. Together with his family, Ray has committed his life to serve others as God intended.