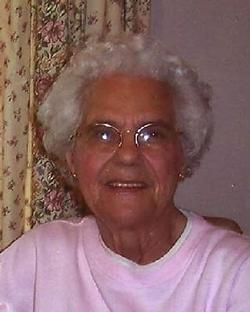 Agnes "Bobbie" T. Prasnicker Stepanich formerly of Neodesha KS, died Monday, May 28, 2012 at the Bellevue Nursing Home in Oklahoma City, Oklahoma. She was 93.

Funeral services will be held at 2 p.m., Saturday, June 2, 2012 at St. Ignatius Catholic Church. Father Steve Thapwa will officiate. Interment will be in the Neodesha Cemetery.

The family will receive friends at the church hall on Saturday from 1-2 pm.

The daughter of Steve and Josephine (Benda) Prasnicker, she was born April 12, 1919 in Franklin Kansas. She graduated from Crawford Community High School, in Arma Kansas in 1938. She received her training to become a registered nurse from Mount Carmel Hospital in Pittsburg Kansas, graduating in 1938. She then moved to Neodesha to begin work as a nurse for the Wilson County Hospital.

On Nov. 7, 1945 she was united in marriage to Henry Martin Stepanich of Neodesha, in Franklin KS. Mr. Stepanich precedes her in death. They were residents of Neodesha until her husbands transfer to Wood River, Illinois in 1972. Bobbie moved back to Neodesha in 2007.

While living in Neodesha one would see her walking to work each evening. She would work the night shift so that she would be at home when her children were around. Family was very important to her. She only had one speed in her gait, which was fast. She felt that it enabled her to be able to do more of that which she loved doing, which was nursing.

In her later years Bobbie would rejoice in the fact that, she was on the earth to do more because she could get around well without any discomfort. She would use this enthusiasm to continue to help others, make people laugh, and dance. Her motto always was, "I can always rest when I die."

Bobbie is survived by two sons, Robert and his wife Pam of Platte City Mo., and Jim and his wife Vicki of Lincoln NE, two daughters, Francene Weatherby and her husband Gerald of Oklahoma City OK, and Mary Ann Bauman and her husband Chris of Neodesha KS: three grand children, Tracy Weatherby, Allison Lee and Lauren Bauman; and 1 great-grand child, Jon Kelly Lee.In addition to her husband, she was preceded in death by her parents, and one sister.

Memorial contributions may be made to the Wilson Medical Center Foundation or the St. Ignatius Catholic Church building fund.