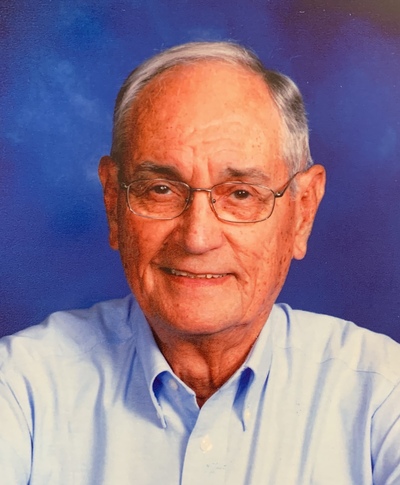 Al was born August 9 1930 on his maternal grandmother’s farm in Millville, NJ to Albert and Lillian (Komer) Werner.

From the time he was a boy, Al was fascinated with airplanes.  His love of flight led him to receive his pilot’s license in 1967.  He was part owner of 2 single engine airplanes.  He was a member of the Missouri Pilots Associciation from 1973 to present, serving as State President for 2 terms.  He founded (and was especially proud of) their Educational Endowment Fund, a scholarship fund for promoting general aviation through education and safety.   He managed the Fund for 15 years.  He was also a member of the Civil Air Patrol serving as State Finance Officer for 4 years.

He met the love of his life and future wife of 59 years, Monica Myers, in high school band class. They married on April 28, 1951 in Bridgeton, NJ while Al was in the Navy.

Al proudly served in the US Navy from 1947-1954 on board the USS Wisconsin, the USS Donner, and the USS J. Douglas Blackwood.  The latter led to his lifelong association with the Destroyer Escort Sailors Association and their Historical Society.

Al got his career start in the Navy when attending Disbursing School.  Upon discharge he worked for several corporations in Cincinnati, OH in cost accounting and auditing.  In 1964 Al received a BS in Commerce from the University of Cincinnati.  He advanced to Controller positions which resulted in moves to Topeka, KS and ultimately Kansas City, MO.  After retiring, Al and Monica moved to Oklahoma City, OK.

Al had a wide variety of interests and hobbies with an incredible memory for details.    He loved playing the piano and the organ.  He enjoyed food and was a fantastic cook.  He researched family genealogy and was proud of his ‘Germans From Russia’ heritage.  Al was passionate about fishing, education and travel.   He traveled extensively for pleasure and work, visiting all 50 states and 5 continents.  He enjoyed art, nature, history, cartoons, science, trains, and learning.

Al was forever curious and had a genuine zest for life.    Al’s greatest treasure was his family to whom he was devoted.   He was a loving husband, father and grandfather.

Al is predeceased by his wife, his parents and his brother William.

Al is survived by his daughter Karen Harrison and her husband Donald of Oklahoma City, OK; his daughter Linda Werner and her husband Christian Hagaman of Preston, CT;  his grandson Keith Harrison of San Antonio, TX; his brother George Werner of Tavernier, FL; and several neices, nephews and extended family.

Al chose to be cremated.  He’ll be interred at a later date in Kansas City, MO alongside his wife.

In lieu of flowers, donations may be made to: