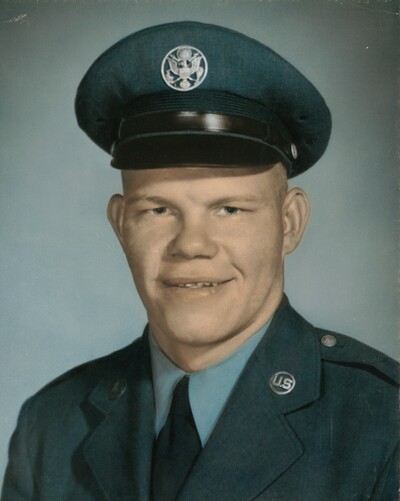 Benjamin Eugene Haning, 87 died peacefully surrounded by his family on February 2, 2021 following a lengthy illness.  Born in Butner, Oklahoma to Nellie Edna and Aaron A. Haning.

He graduated from Wewoka High School in Wewoka, OK.  He then attended Northeastern AM Jr College where he played on the Varsity football team.  He continued his education in Wichita, KS and then the University of Oklahoma.

On July 3, 1953 he married Mary Elizabeth Harp.  He joined the US Air Force  where he served as Instrument Mechanic of F-100 fighter jets.  There he rose to the  rank of Sergeant.  He was stationed in Korea and from there to Japan.  Upon transferring stateside they lived in Victoria, Texas before moving to Oklahoma where he became a General Contractor.   His many building skills included beautiful masonry work.  He was a former member of the Central Oklahoma Builders Association.

He retired from construction work while employed by the State of Oklahoma in 1994 due to his illness.

He was a lifelong member and Deacon of the Southern Baptist Church.  He was an avid sports fan and enjoyed many sports.    He particularly supported OU and Oklahoma State Univ

and had a tough day when they played one another.  He loved fishing, hunting, and enjoyed the peace of nature.

Grandchildren: Katie Haning and Stephen Haning, Brother, James (Jim) Haning of South Carolina and Vera Langston of New Mexico, many  nieces and nephews and a host of friends and family.

Ben was a man of few words and great faith.  Just like the buildings he built, He managed his illness with strength and grace.  True to his faith he loved his Heavenly Father, family, friends, and pets in that order. and always enjoyed spending time with his loved ones. He is now resting in the arms of Jesus and there will be no pain. He was much loved and will be greatly missed by all.

Contributions may be made to American Heart Association, Leukemia and Lymphoma Society, Alpha Phi Foundation (for cardiac aid) or the charity of your choice.