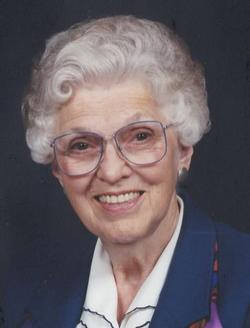 Betty Frances Johnson Huey, 95, passed away on January 11, 2015. She had been in hospice care since August 2014 in Oklahoma City, OK at Sterling House West.

Betty was born in Lovelock, NV in 1919 to Thornton Clarence Johnson and Ruth Frances Stoney. She was predeceased by her husband of 45 years, Fred Huey, and her sister, Ruth Bowman. Betty is survived by her four children: Jennifer McMillian of Olathe, KS; Terry Huey (Dianne) of Oak Point, TX; Randy Huey (Jeannie) of Yukon, OK; and Kirk Huey (Manina) of Naples, FL; as well as seven grandchildren, six-great-grandchildren, other family and friends.

After graduating high school in Lovelock, NV, Betty attended Iowa State University where she received her Bachelor of Science degree in Home Economics. She married Fred Huey in 1946 and moved to Manhattan, KS.

In 1957, Betty returned to college at Kansas State University to renew her teaching certificate and received a Master's and Specialists degree. She taught high school Home Economics in Russell, KS until her retirement in 1983.

Betty was an active member of the First Congregational Church in Russell and a member of local chapter of the D.A.R. Her favorite pastimes were square dancing, sewing, quilting and playing bridge with friends.

Donations in lieu of flowers can be made to the Alzheimer's Foundation of America.