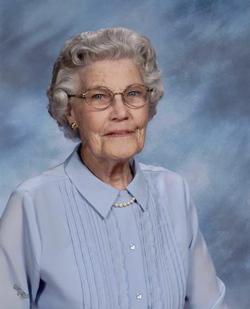 Betty Sue Sullivan was born March 12, 1922 in Memphis, TN to Alexander and Caroline Patton and died on May 23, 2015. She married Julian A. Sullivan (Sully) on January 31, 1942 in Memphis, TN. Before her retirement, she worked as an office manager for Justice Mortgage Co. Betty was a long time member of Crestwood Baptist Church where she was active teaching children's Sunday school, singing in the choir and always willing to help in any capacity. She was preceded in death by her husband, Sully, and her brother, John Patton. She is survived by her son Allen Sullivan and wife Kathy of Madison, AL; son, Bob Sullivan and wife Mary of Oklahoma City; daughter, Carol Hooper of Oklahoma City; seven grandchildren and 11 great-grandchildren. A celebration of her life will be Friday, May 29, 2015 at 1:00 pm at Buchanan Funeral Service Chapel with interment to follow at Rose Hill Burial Park.