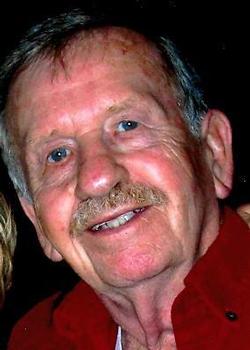 Bob G., beloved husband, father, grandfather, great-grandfather and uncle, passed into the loving arms of Jesus on June 3, 2012 after a courageous battle with cancer surrounded by his loving family.

Bob was born on August 5, 1933 in a small farmhouse in Walsh, CO. His family later moved to Hutchinson, KS where Bob graduated from Partridge High School. He then entered the Army, serving from 1953 to 1955, where he was stationed in El Paso, TX. After serving in the Army, Bob moved to OKC and attended barber school. After graduating, he worked on Campus Corner in Norman, Ok and later moved back to OKC where he has a shop at the old Cabana. For most of his career, Bob operated "Bob's Style Shop" at the former Hilton Inn West, now the Biltmore, for approximately 40 years. He had customers who would drive 100 miles just so Bob could cut their hair and had many customers who were with him for his entire career. Bob retired in 2010, taking with him a lifetime of wonderful memories and special friends. His shop was the "unofficial" meeting place for many of his friends who stopped by sometimes just to shoot the breeze and many who made Bob's shop their first stop of the day.

Bob married the love of his life, Joanne, and they shared 33 fun and loving years together. They purchased a place at Porum landing at Lake Eufaula in 1981 and enjoyed many unforgettable memories (and some forgettable memories!) with family and friends. Everyone agreed that these were the best years of our lives, swimming at "the Cut", riding on the "yellow banana", trolling for sand bass, watching OU football in the Fall and just relaxing on the deck. Many a Thanksgiving was enjoyed at our place at the lake. Bob took great pride in his family and they took great pride in him. Although not a person of many words, he loved his family and friends with all his heart. Very seldom did you ever hear a mean or unkind remark about anyone; he was truly one in a million. His grandchildren were a source of constant love, laughter and caring and were always there to give their papa lots of hugs. His great-granddaughters were the apple of his eye and whether talking to them on the phone or seeing them in person, there was always a twinkle in his big blue eyes. Bob was especially proud of his son-in-law, Jimmy North, who Bob loved like a son. During his final months, Jimmy was constantly by Bob's side for any help needed. A special thanks also to our niece Hilary and her mom, Michelle, for all their help during the last months of Bob's life. He loved them dearly.

Bob's love of animals was even overshadowed by his love of OU football. Baylee, his Maltese/Shi Tzu, was definitely daddy's little girl and his constant shadow while Bo (even tho' mamma's girl) loved his daddy almost as much as Baylee loved and adored him.

Bob was preceded in death his parents, Emory and Mary Thompson and a sister, Joann Epperson Lockman. He is survived by wife, Joanne; daughter and son-in-law, Pam and Jimmy North; daughter, Brenda Tilley; grandchildren, Debbie Spitler, Scott Tilley and wife Lauren, Jessie North and Tyler North; great-grandchildren, Whitney and Abby Spitler; and two more great-grandchildren on the way; sisters, June Bernhardt and husband Don, Pat Wooledge and husband Everett; brother LaVon Thompson and wife, Lorrinne as well as over 40 nieces and nephews and too many great nieces and nephews to count. The "Thompson Clan" was a large and loving family.

Contributions may be made to the American Cancer Society or Free to Live. Visitation will be Thursday, June 7 from 9:00 – 8:00 pm with the family receiving visitors from 6:00-8:00. Services to celebrate his life will be Friday, June 8, 2012 at 2:00 PM at Buchanan Funeral Service Chapel with interment at Resurrection Cemetery.