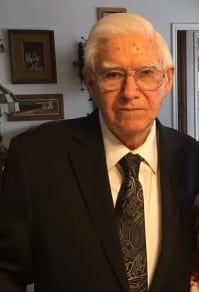 Have you ever seen a real hero? Bobby Lawson was a real hero. Bobby Raymond Lawson was born September 19, 1931 in Trousdale, Oklahoma in Pottawatomie County. He grew up working on the farm with his 3 sisters and one brother.

He was drafted Oct. 23, 1952 into the US Army basic training in California, then stationed in Japan for a month before going to Korea with the 224th Infantry Regiment attached to the 45th. On May 17, he made a beach landing and was sent straight to the front lines. He was also part of the 2nd wave to protect the front lines in the Punch Bowl valley and fought in the battles of Bloody Ridge, Heartbreak Ridge and Sandbag Castle, fighting 3 days without food and water. He was given a Unit Citation for Leadership and earned promotion from Private to Sergeant. He was also awarded the Combat Infantry Badge, the Korean Service Medal with Bronze Service Star, the United Nations Defense Service Medal for Good Conduct, and was later issued the Presidential Citation from the Korean President.

After his service in Korea, he went to work at American Iron again in Oklahoma City. Bob met and married the love of his life, Pat, on May 29th, 1966. He was Dad to two boys. He adopted Jeff as his son and a year later, they had Jeff’s brother, Lloyd. Both Bob and Pat have been members of Trinity Baptist Church for many years. He started working at Tinker and stayed there 20 years. He spent his retirement years with his wife and two sons owning and running “Flowers By Pat” until June of 2022 when they sold the building.

Bob was preceded in death by his parents, James Raymond and Mayme Essie Lawson, and sisters, Ilene, Peggy and Judy.
He is survived by his wife, Patricia (Gentry) Lawson; sons, Jeffrey Lloyd and wife Jennifer Lawson, and Lloyd Raymond Lawson; grandchildren, Robert and Denisa; and brother, Danny and his wife Beverly Lawson. He will be missed by many family and friends who loved him.

A funeral service for Bobby will be held at 10:00 AM at Buchanan Funeral Service Chapel on Thursday, November 10th. Burial will follow at Memorial Park Cemetery in Oklahoma City.