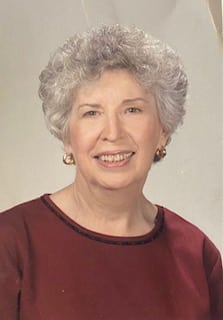 Beverly Kay (Lee) Clark, 82, of Oklahoma City passed away on November 3, 2022, after suffering a stroke.
Kay was born on April 1, 1940, in Waldron, Arkansas. Her father’s occupation as a Soil Conservationist for the State of Arkansas required the family to move to several other towns in the state: Murfreesboro,
De Queen, Benton, and finally settled in Mena in 1950. Kay graduated from Mena High School with the class of 1959.
Kay married Ronald Hall in Mena in 1958 and they had two daughters from this union, Sylvia and Natalee. The family lived in Mena until 1969 when Ron accepted a position in Texarkana, Arkansas.
Kay attended cosmetology school in the early 1970s while living in Texarkana and became a cosmetologist. She worked until the mid-1980’s in this profession.
In 2002, Kay moved with her daughter Natalee and family to the Pacific Northwest. The following year, she became a House Mother for the Chi Omega Sorority at Washington State University, WSU, in Pullman WA. She held this position until 2010, transferring back to Oklahoma
she became a House Mother for Alpha Delta Pi, at Oklahoma State University, OSU, until 2015 when she retired.

Services pending at this time.