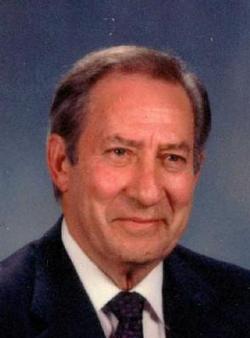 Stevens,
Carl E. was born Oct. 27, 1925 in Stilwell, OK, the seventh of eight children of Alfred E. Stevens and Minnie Hatfield Stevens. He attended public school until the age of 17 and with his parents consent joined the US Navy and served aboard the USS War Hawk as a coxswain on landing crafts for seven invasions of the Philippines and Guam in the Pacific theater of WWII earning his first Purple Heart. At war&#39;s end, he returned home to finish high school and attended Northwestern State College on a football scholarship. A superior athlete in all sports including boxing of which he was a Golden Gloves Champion winning his final match with his left hand as his right hand was broken. Upon graduation from college in 1950, he enlisted in the US Army and was commissioned as a 2nd Lt. He completed Army Airborne Ranger Training and fought in the Korean War with the 45th division 279th Infantry 10th Co. Airborne Rangers. As a platoon leader of an elite special unit trained for night fighting named The Stevens Raiders, he earned numerous medals including a second Purple Heart, Bronze Star and Silver Star for bravery under fire. Upon his return from Korea, he married the love of his life, Catherine Sue Buckner of Stilwell, OK and had two sons, Carl Jr. and James. He was commissioned as a Captain in the US Army and in 1989 was designated as an Honorary Colonel in the US Army Reserves. He was awarded 17 military awards and decorations. After Korea, he was an Oklahoma State Highway patrolman for seven years before beginning his storied civil service career as an undercover Federal Agent of the US Treasury Dept. In 1982 after a distinguished 25 year career as a Federal Special Agent, he retired from the Drug Enforcement Agency (DEA), US Dept of Justice in Okla. City receiving 19 letters of commendations and 7 citations for bravery. In 1984 he was appointed as a US Deputy Marshall serving until his retirement in 1996. Carl was preceded in death by his wife Sue and is survived by their two sons and their families, Carl & Debbie Stevens of The Woodlands, TX and James & Cindy Stevens of Okla. City; 8 grandchildren and 6 great-grandchildren. He was a charter member of North MacArthur Church of Christ. A Military graveside service will be 10:00 AM, Wednesday, March 28 at Resurrection Memorial Cemetery with a Memorial service to celebrate his life at 11:00 AM, at North MacArthur Church of Christ.