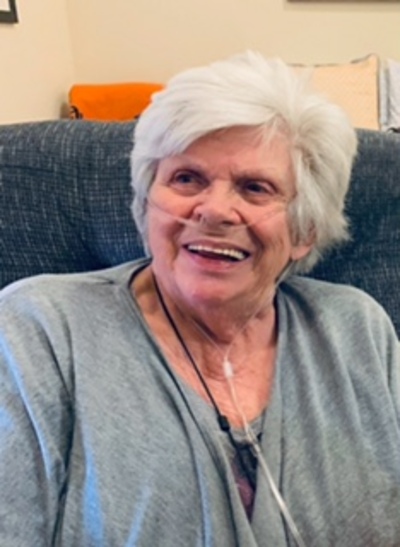 Carolyn Sue Graham, age 80, of Wichita, KS Passed peacefully at home with her family at bedside. Sue was born to Paul and Willene Kinney on September 22, 1941, in Elk City, OK.  She attended Merritt Public Schools until the family moved to Bethany, OK, in 1952.  She attended Bethany Public Schools making friends quickly with her sunny personality and enjoyed choir and cheerleading.  She then attended Putnam City Highschool, enjoying choir, cheerleading and Student Council. She graduated PCHS in 1959.  During high school, she met the love of her life, John Earl Graham. They married March 25, 1960, and had two children, Deborah Lynn and John Michael. Johnny and Susie were blessed to celebrate 51 years of marriage.  She is preceded in death by her brother Larry Kinney, mother Willene Kinney, brother Ronnie Kinney, husband John and father Paul Kinney.

In the early 1960s, Susie worked at Metropolitan Life Insurance Company until her second child was born and then she became a stay-at-home mom until her children were of school age. Johnny became a policeman in 1963 and Susie was the epitome of a police wife. She prayed for him, she did not express worry for him, she did not nag and she did not try to change him. She loved him well when he came home to us from shift. When he was too serious, she would give him a peck on the check and bring a big smile to his face. During this period, she was a member of the Ladies Auxiliary #123 of the Fraternal Order of Police, which partnered with Women for a Safer City, following the Oklahoma City tax law/increases to improve the police to citizen ratios.  She then began her career in 1971, as an administrative assistant for the Humpty Supermarket chain for 10.5 years. During this time, she also represented the stores as their “Watermelon Girl” in Humpty’s Watermelon Patch, posing for newspaper and television commercials that ran for 3 years during the month of August. She left just prior to their closure, but enjoyed and treasured the numerous annual reunions that were held. In 1983, she went to work for Genie Temporary Service filling many interesting roles during her tenure, receiving honors for Genie Temp of the Month, and then, the Oklahoma Temporary Help Association Employee of the Year Award which included recognition from the Governor’s Office. The temporary work allowed her the opportunity to travel as a guard with her husband, doing inmate transport both in and out of state. She also supported her husband in his leadership of the Retired Police Officers Association “RPOA” for 13 years and then as members. In 1993, she became a reserve deputy for the Oklahoma County Sheriffs Office. She was called to serve as a first responder during the Oklahoma City Bombing. She remarked that it was one of the highlights of her life to be able to serve her community during such a tragic and historic event. She enjoyed the variety of assignments that this position offered, and earned the title of Sergeant. During her tenure, she was appointed to the Oklahoma Gang Investigators Association, a statewide agency.   In September 1995, she became a contract worker for the United States Marshalls Service as an aviation security officer based out of Will Rogers Field under the Justice Prisoner Alien Transportation System, “JPATS.” They transported inmates from the Federal Transfer Center in OKC to and from points in all 50 states and beyond, but still in our hemisphere, via 727s and Sabreliners. They carried names you’d definitely recognize as well as illegal aliens who would grin and say “see you next week,” as they would exit the plane at the border. And, she says, many times they did. Ha,Ha! This position fulfilled a lifelong dream to work in the airline industry. SHE LOVED TO FLY! All in all, she remarked that it was a very educational and extremely fulfilling period of her life, an adventure she greatly treasured until the end.

In 2000 she left the Marshalls Service to spend time with family and friends. She cared for her elderly father, was fully involved in her twin granddaughters’ lives and was always a great support to her son and daughter. She enjoyed her Monthly Friday Lunch Club with her former PCHS classmates, the RPOA meetings and the Blue Knights Law Enforcement Motorcycle Club and their Saturday rides.

Mom was a faithful supporter of her family and a prayer warrior for each of us. We were blessed by her faith and the love of Christ that came to us through her. We will miss her happy spirit, her joyful laughter and her unconditional love and devotion to us.  However, we rest easy in the knowledge that she has gone home to our Father and resides in a beautiful new body and suffers no more.

We are grateful for the support of The Regent Senior Living staff, Interim Nursing care and Interim Hospice Care. Their relationships and support have given us the strength to support mom in the manner in which we desired and have positively impacted mom’s final years and days. You have been a great blessing to us.

In lieu of flowers, donations may be made to the Retired Police Officers Association, Attn. Scholarship Fund, 1624 S. Agnew, Oklahoma City, OK 73108.