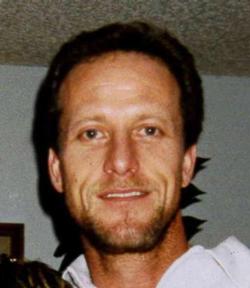 Craig went home to be with his Lord on April 30, 2016. He was born in Enid, OK to Dean Edward Roberts and Lavina Sue (Thompson) Miller. The family moved to Citrus Heights, CA when Craig was five years old. The family moved back to OK during Craig's junior year in high school. He attended Mesa Verde High School in Citrus Heights and Morrison High School in Morrison, OK. Craig loved his family, and OU football the most, he always watched OU basketball and baseball too. If it was OU it was his great love. He wore OU baseball caps year round. Craig married Stephanie Arthur and they had two children, Cody Lee Roberts and Kirsten Ann Roberts. They later divorced. Craig raised his two children. He later married Angela Chronic and they later divorced. He married the love of his life, Heather Nicole Heinzig. Heather lost her battle to cancer Nov. 2014. A blood clot hitting his lung in 2010, started the decline in his health. Craig worked numerous jobs after marrying. However, he started Roberts Overhead Door out of Yukon about 15 years ago, until his failing health slowed him down. Craig is survived by his Father, Dean Edward Roberts; mother, Sue and husband O.D. Miller; his son, Cody Roberts and Jami; his daughter, Kirsten Roberts; two grandsons, Bentley and Connor King; brothers, Wade Roberts and Pam, Todd Roberts and Shannon and their son, Austin Roberts and aunts, uncles and cousins. He was preceded in death by his maternal grandparents, Clarence and Oleatha (Meeks) Thompson, his paternal grandparents, William and Edith (Dixon) Roberts, his uncles, Kenneth Thompson and Billy and Milton Roberts. Services are scheduled for Wed., May 4, 2016 at 10a.m. at Buchanan Funeral Service. The family will then have a private interment at McGuire Cemetery near Lucien, OK.