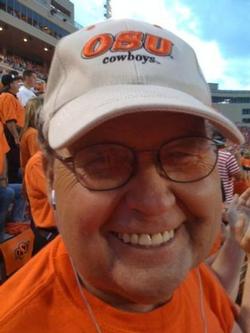 David Aldon Waggoner, age 63, passed away on March 5, 2015. He was the loving husband of 42 years to Cindy (Unruh) Waggoner and proud and doting father of Kevin and his wife Julie. He was born in Marlow, OK and lived in Watonga and Yukon. He graduated from Watonga High School in 1969 and earned degrees from OSU-Okmulgee and Francis Tuttle Vo-Tech. He was preceded in death by parents Wesley and Lorilda Waggoner of Watonga; grandparents Joseph and Melviney Price & William and Lillie Waggoner. He is survived by his wife, Cindy, of the home; son, Kevin and wife Julie, Tulsa; sister, Trina Kautz and husband Bill, Yukon, brother Stanley and wife Jeanie, Watonga; and many nieces and nephews.

David's started the auto parts department for Garden Spot Oil Company, owned by his parents, then served many years as the accountant for the company. David and Cindy owned and operated Watonga Floral for many years before moving to Yukon. David was an avid Oklahoma State fan and enjoyed attending and watching football, basketball and baseball games with his son, Kevin.

Public viewing and visitation will be held from 1:00 PM to 8:00 PM, Sunday, March 8, 2015, at Buchanan Funeral Service in Oklahoma City. A funeral to remember David will be held at 11:00 AM on March 9, 2015 at St. Anthony's Catholic Church, 211 South 5th Street, Okeene, OK, with burial to follow at Cottonwood Cemetery in Hitchcock.