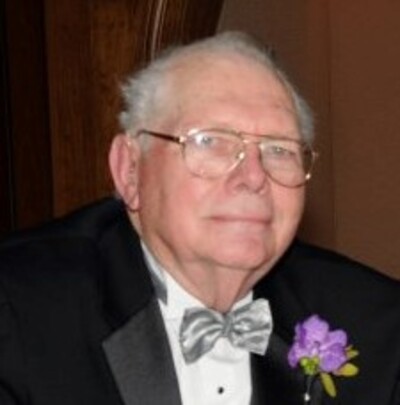 Don was born in El Paso, Texas and grew up in Superior, Arizona, as well as El Paso and Kermit, Texas. Don attended North Texas State College (now UNT), where he earned a bachelor’s degree in Economics and also played tuba in the band. He also pursued a master’s degree at North Texas State University. Don was drafted to the Army during the Korean War, and he was stationed at Fort Niagara. After being discharged, Don accepted a position with Western Electric. Don and Bonita met at an apartment complex in Dallas where they both lived and commuted downtown. They began dating, and after a short courtship, they married in Dallas and began their life together. Don’s thirty-two-year career with Western Electric/AT&T included moves to numerous cities in six states throughout the U.S., and Don testified before Congress on the potential economic impacts of the breakup of the Bell system. Don and Bonita returned to Oklahoma City when they retired, and they enjoyed traveling and spending time with their children, grandchildren, and great grandchildren in retirement. Don was an active member of Cherokee Hills Church of Christ until his health declined in recent years.

Despite being an OU season ticket holder for over 40 years and an OU fan for over 50 years, Don’s favorite team was the Texas Longhorns. He loved to wear his UT ball cap and loudly play the Eyes of Texas every football Saturday. Don adored his loving wife, Bonita, and he missed her terribly after her death in 2020. He would tell everyone that he was the luckiest man alive to be married to her. Don was extremely proud of all of his children, grandchildren, and great grandchildren, and he loved to brag about their accomplishments. Several of his grandchildren and great-grandchildren were named in his honor.  Evan Kenneth is named after Don, Caitlin Elise is named after Don’s favorite aunt, as well as his sister Maurine Elise, and Tyler and James both carry the Fraser name as their middle name. Don’s father emigrated to the United States from Scotland, and he was proud of his Scottish heritage.

In lieu of flowers, please send donations to Stephenson Cancer Center (in memory of Bonita), The Alzheimers Association (in memory of Maurine), or the Boys & Girls Clubs of Oklahoma County.

The family will hold a private service and burial.