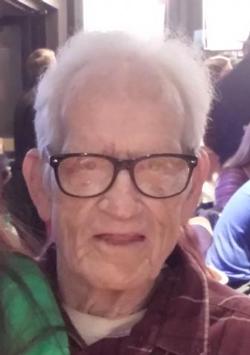 Donald Ray Webb, age 88, passed away on July 28, 2016 in Oklahoma City. He was born April 18, 1928 in Hartford, Arkansas to Argie and Maude Webb. He enjoyed watching Texas Ranger baseball, OU Sooner Football, and playing softball for his church. He was a charter member of Brookwood Baptist Church in Oklahoma City formerly First S.W. friendship Church. He loved fishing with Albert Ehrhart and Glennon Ward and his son-in-law in Ft. Gibson. He worked for Tinker Air Force Base for 20 plus years. He was preceded in death by his wife, Ruby Louise Webb in 2007. He is survived by his daughters, Donna Weymouth (Mike), Denise Visser (Kyle); 4 brothers, Cedell, Kenneth, Dean, and Clovis; grandchildren, Courtney and Whitney Weymouth, Jake, Judd, and Jordyne Visser; and great-granddaughter, Charity. He was a kind and generous man who always had time to help when called upon. Graveside services will be 2:00 pm, Monday, August 1, 2016 at Mt. Olivet Cemetery in Pauls Valley, OK.