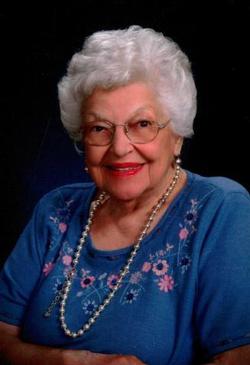 Doris R. Benjamin, 88, of OKC died Tuesday, April 23, 2013 at Concordia Nursing Home in OKC. She was born August 7, 1924 in Arapahoe, Nebraska to Rev. William and Elizabeth Roesler. She was raised and educated in Nebraska. In 1945 she graduated from the University of Nebraska with a degree in Business Education. Doris taught at the High School level for several years before becoming a stewardess for United Airlines. After getting married she left the work world to concentrate on raising her children and re-entered the work world when her children were grown as a secretary for the Department for Respiratory Therapy, University of Oklahoma Medical Center. She also spent countless hours volunteering her time at Messiah Lutheran Church. On September 11, 1949 she came down from the skies to marry her high school sweetheart J. Philip Benjamin. They were blessed with the gift of four children and eight grandchildren. They include Tom and his wife Brena of Austin, TX and their two children, Paul and Jane; Bruce and his wife Becky of Claremore, OK and their daughter Hannah; Nancy and her husband Brad Makowsky; Mary and her husband Chris Keaveny of Madison, WI and their 5 children Clint, Ryan, Kevin, Megan and Joe. Also surviving are her sisters, Trudy Todd and her husband Charlie of Murdock, NE and her sister Edith Isaacs of Sacramento, CA. She was preceded in death by her parents, her brother, Ted Roesler of Lincoln, NE, her sister Rhoda Cox of San Diego, CA. and her sister Erna Link of Chicago, IL. In lieu of flowers, memorials may be made to Messiah Lutheran Church, earmarked for the school, at 3600 NW Expressway, OKC, OK 73112 or to the American Diabetes Association at PO Box 1834, Merrifield, VA 22116-8034. Visitation will be Friday, April 26, 2013 from 12 noon – 8 PM with the family greeting guests from 6-8 PM at the funeral home. Services to celebrate her life will be at 10:30 AM, Saturday, April 27, 2013 at Messiah Lutheran Church with burial to follow at Rose Hill Burial Park.