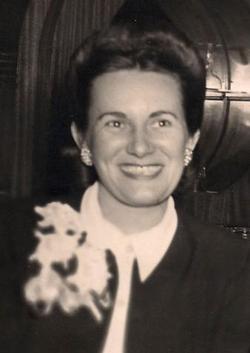 Dorothy (Dot) Schroeder, 94, a loving wife, mother, grandmother and great grandmother, passed away in Dallas on September 21, 2013. She was born May 10th 1919 in Chicago, IL. to Martin Rieckmann and Lucie Buetel. She spent the majority of her retirement years living in Oklahoma City with her husband Ed. Together they played as much golf as possible, enjoyed dancing and spending time with friends.
She was preceded in death by her husband, Edwin Henry Schroeder; her son in law, Lawrence Yocum; and ten brothers and sisters. She is survived by her daughter, Karen L. Yocum; three grandsons, Michael, John, and Scott Yocum; three grand-daughter in-laws, Abby, Amanda and Megan; and six great grandchildren.
A memorial service will be held at Resurrection Memorial Cemetery at 12:00PM on Tuesday, Oct 1st .
In lieu of flowers, memorial donations may be made to Brother Bill's Helping Hand, P.O. Box 565846, Dallas, TX 75356. Brother Bill's is a faith-based nonprofit that enriches the lives of people in the West Dallas community.