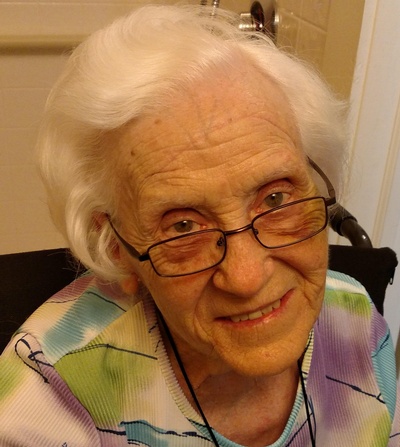 Dorothy Mae York passed from this life on May 15, 2018.  She was born June 5, 1927, to George G. Rauh and Elsie Louise (Schultz) near Okeene, Oklahoma. She spent her early years growing up on a farm in Blaine County, Oklahoma, attending Liberty School and Okeene High School, graduating in 1945. While working as a telephone switchboard operator in Enid, she met Floyd Lee York. They were married on May 6, 1946, and began their journey together, raising two children, teaching them their values, and sharing joys and sorrows until his death on July 15, 2007.  Dorothy’s delight was traveling with Floyd in their camper from coast to coast and exploring the world in exotic places such as Russia, China, Egypt, and Israel. For over fifty years she was a steadfast member of Putnam City Christian Church, occupying the same pew, volunteering, and praising Jesus with her voice.  Her greatest pleasure was spending time with her grandchildren and great-grandchildren who surrounded her with love even until her last hours. Dorothy was preceded in death by her parents; four brothers, Arthur William Rauh, Edward Leroy Rauh, James Monroe Rauh, Donald Gene Rauh; and one sister, Delores Jenethea Metzger. She is survived by a brother Floyd Dean Rauh; a daughter, Yvonne Ann Sapp; a son, Rudy Lynn York; five grandchildren, Melanie (Holmes) Trotter, Rene (Holmes) Lowrance, Nathan Holmes, Derek Lee York, and Nicholas Scott York; and ten great-grandchildren…Alex, Zach, and Caroline Trotter; Garrett, Grady, Gabriella, and Grace Lowrance; Luke, Kileigh, and Abby Holmes.