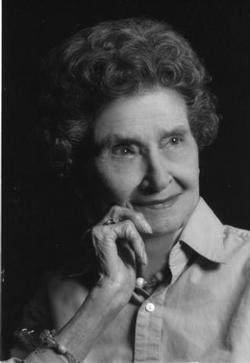 Drusilla V. Cavin passed from this life to eternal rest on January 13, 2013. Dru was born to Thomas Payne Jones and Dozena Carnahan on February 24, 1918, in Wainwright, OK. She graduated from Wainwright high school and East Central State College in Ada, OK.
While in high school, a new neighbor moved in across the street. Of course, Riley Cavin was that neighbor and they entered into a loving marriage in 1941. Two children were born to this partnership and Dru placed priority on parenting the children and keeping a Christian home. However, Dru also developed two passions in life beside her family. From a young woman until her death, she was an avid painter and a serious antiques collector.
Predeceasing Dru were her parents, two sisters Lela and Thelma, niece Phyllis Dunn, and in 1988, her beloved husband of almost 50 years. Dru was a life-long member of the Church of Christ. She placed emphasis on living a moral life and will be remembered as a faithful Christian.
Surviving Dru are her son, Riley Cavin, Jr. of Houston, TX, daughter Nancy McMahon and husband Doug of Dallas, grandchildren John, Heather, David, Ashley and Hollis, and four great grandchildren. She is also survived by many nephews and nieces, a cousin Mabel Boss of Muskogee, OK and several long time friends.
Services will be held at North MacArthur Church of Christ on January 16, 2013, at 11 o'clock. Memorial contributions may be made to North MacArthur Church of Christ, 9300 North MacArthur, Oklahoma City, OK 73132.