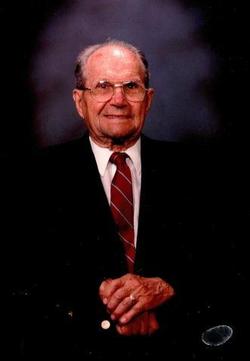 Edward Newman Brandt, 97, left this world on Wednesday, March 4, 2009, to be with his Lord and Savior in eternal life.
Ed was born September 23rd, 1911, in Crekola, OK, to Winthrop Peter and Celestia Jane Brandt. He was pre-deceased by two sisters, one brother, and his oldest son, Dr. Edward Brandt, Jr.
He proudly served his country as a member of the US Navy in the Pacific front. He enjoyed a lifelong career in the newspaper business including the Daily Oklahoman (1939-1942).
He is survived by his cherished wife, Pat, of OKC. Ed and Pat enjoyed 56 years together.
Other survivors include a sister, Mary, of Tulsa; daughter, Jenny Wessel, of Dallas; son and daughter-in-law, Carlin and Helen, of Austin, TX; six grandchildren and five great-grandchildren.
Services will be held 10AM, Monday, March 9, at Forest Hill Christian Church. Interment will follow at Chapel Hill cemetery. Visitation is Saturday, 9am-8:30pm and Sunday 1-8:30pm at Buchanan Funeral Service.
In lieu of flowers, memorials can be made to the Forest Hill Christian Church or the charity of one&#39;s choice.