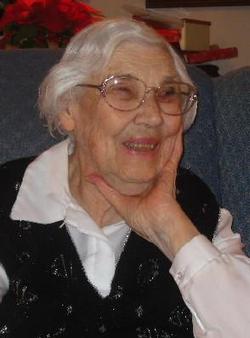 Ella Ruth Ford died on Sunday, August 23 at Mercy Hospital in Oklahoma City, OK at the age of 88. She was born on May 4, 1921 at home in McCook, NE. She was the daughter of the late William and Magdalena Baumbach.
Ella was baptized and confirmed at Peace Lutheran Church in McCook, NE, and also graduated from 8th grade from Peace Lutheran School. She graduated from McCook High School in 1938.
After graduating from high school, Ella found a job selling magazines with a group of other young women. In the next few years she traveled to 46 states and always had fond memories of this time of her life. When World War II started, she went to Cleveland, OH and worked in a war plant.
After the war was over, Ella returned to McCook, NE where she met her late husband, George Ellsworth Ford, while working at the Keystone Hotel. After marriage, Ella and George lived briefly in McCook, NE, Denver, CO, and North Platte, Nebraska before moving to Garden City, KS where they lived from 1955 until 1964. In Garden City, her only son, Billy, died in a drowning accident, which was the greatest tragedy of her life.
In 1964, George and Ella moved to Wichita, KS where Ella became one of Wichita's first female mail carriers. They continued to live in Wichita until George's death in 1996. Ella then moved back to McCook so that she could be near her sister, Thelma.
Thelma passed in 2002, and in 2004, Ella move to Oklahoma City to be near her daughter, grandchildren, and great grandchildren.
Ella was preceded in death by her parents, her son Billy, her husband George, and all of her brothers and sisters, including William Baumbach, Edwin Baumbach, Lorenz Baumbach, Henry Baumbach, Clara Breitling, Esther Breitling, Margaret Rogers, and Thelma Baumbach.
Ella is survived by her daughter, Mary Norris, and her husband, B. C Norris. She is also survived by three grandchildren, Melissa Norris, Josh Norris and his wife Mistie, and Jeremy Norris. She is also survived by three great grandchildren, Mercedes, Christian, and Alexis Norris as well as numerous cousins, nieces, and nephews.
Ella loved to attend weekday Bible study and she enjoyed her morning paper, especially the crypto quip. She loved anything related to spending time with her grandchildren and great grandchildren. In their retirement years, she and George loved to attend senior citizens dances and always kept a home which was open to many friends.
Services to celebrate her life will be 3:00 PM, August 26 at Buchanan Funeral Service Chapel in Oklahoma city with interment at Memorial Park Cemetery, August 29th in McCook, NE.