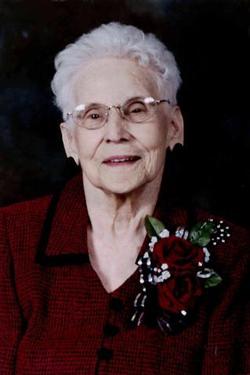 Floy Palmer, 97 formerly from Guymon, OK passed away peacefully from this life on December 28, 2014, at her daughter's home in Oklahoma City. She was born on November 28, 1917 to C.E. "Ed" Rice and Buna (Lawson) Rice in Honey Grove, TX. The youngest of six children, she lost her mother at the tender age of 9 months to the Spanish flu epidemic of 1917. After several years of raising his children alone, her Daddy moved his family to Peggs, OK where family and friends would help ease their struggle.

On June 11, 1945, Floy married Raymond Palmer also from Peggs and in 1950 they moved to Guymon where they raised their family and she made her home for over 50 years. Raymond passed away in 1993. Nothing meant more to Floy than family. She cherished the time she had with her 3 girls and their families. She was an active member of the Northridge Freewill Baptist Church until 2002, when due to dementia, she moved to Oklahoma City to be closer to her daughters. Early in her move to Oklahoma City, she enjoyed attending the Daily Living Center an adult daycare center. As her illness progressed, she lived with her daughter Karen and son-in-law Johnny who diligently cared for her up to her last breath.

Floy was preceded in death by her parents and husband, as well as her 5 siblings, brother-in-law and sisters-in-law; Delbert and Opal Rice, Orville and Delorous Rice, Audie and Naomi Rice, Melvin and Emogene Rice and Hester and Lloyd Williams. She was also preceded in death by brothers and sisters- in- law Leonard and Dorothy Palmer, Dee and LaVada Palmer and Inez Jamison. She is survived by daughters and sons-in-law Karen and John Jordan, Carole and John Seabury, Donna and Greg Strawn; grandsons: Trahern (Tiffany) Jordan, Patrick Jordan, Ty Seabury, Brian Strawn and Brent Strawn, and one great-granddaughter Hera Jordan.

Burial will take place at 1:00 pm on Friday, January 2, 2015 at the Elmhurst Cemetery in Guymon under the direction of Buchanan Funeral Service in Oklahoma City. A memorial music program fund has been established at the Northridge Christian School in Guymon, OK.