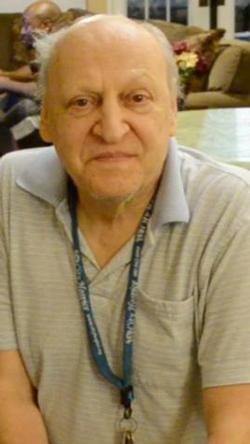 Sergeant Frank J. Crugnale went to be with the Lord on Monday September 26, 2016 after suffering from a cardiac arrest 2 days prior. He is survived by his sister Beverly Ann Stevens and his nephews Aaron Stevens, Shawn Steven, Jr., Marvin McQuaid, Jr., niece Laura Hood and his grand-nephews Thomas McQuaid, Michael McQuaid and Zachary McQuaid along with his cousins Marlene Lacey, Heather Boyko, Wesley Black and Grant Martin in Canada and cousins from the Crugnale Family: Damon Torrey, Nancy Palermo, Patty, Barbara, David Crugnale, Max Daniels and Nick Crugnale.
Frank loved music and was a fine musician. His love for music started at a young age. He first started playing the accordion at 11 years old. Frank attended West High School in Rochester, NY and then went to Roberts Wesleyan College where he graduated with a Bachelor of Arts Degree in Social Studies in 1965. He loved to study and learn about history. He continued his education and received his B.S. Degree in Music from Roberts Wesleyan College and also studied at the George Eastman School of Music. He always admired the drums, but his main instruments were the piano, accordion, guitar, trumpet, French horn and clarinet. Frank's hobbies that he loved besides music were tennis, photography, Watkins Glen car racing, biking, fishing and art.
In 1967, during the Vietnam War Era, Frank answered the call from Uncle Sam and joined the U.S. Navy. He attended Radio School and finished in the Top 10 of his class. Frank's duty assignment was based near Athens, Greece. When he first flew to Greece he coincidentally was on the same plane as Jackie Kennedy. Frank also served in the Mediterranean Sea in a submarine and on a Destroyer as a radio man. Frank served in the military for a total of 27 years– 4 years in the U.S. Navy and 23 years in the Army National Guard while he lived in Rochester, NY.
Frank moved to Oklahoma City in 2008 to be near his family. He was a charter resident at The Village at Oakwood Senior Living Center and was very comfortable there as his "home" and made many friends there. He enjoyed doing acrylic painting and he loved giving art lessons to the other residents. Frank would play the piano on Sundays for the Windsor Hills Baptist Church services that were held at The Village at Oakwood. Frank later moved to the Quail Ridge Senior Living Center in 2015 where he made more friends and enjoyed his days there very much.
As Believers in Christ, we now celebrate Frank's life and his trust in Jesus Christ as his Personal Savior. One glorious day we will all be together again in Heaven. May God Bless you all that knew Frank and loved him.