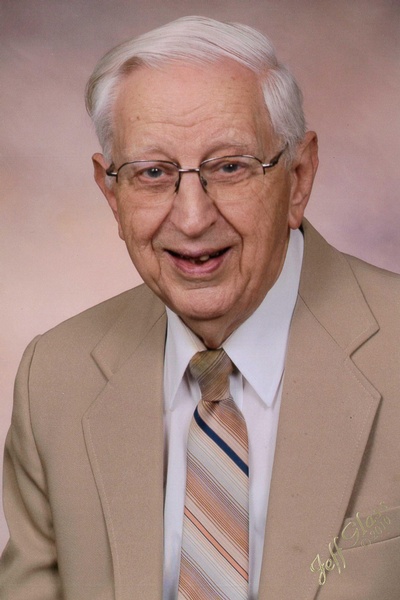 Harold Kamman was born Nov. 8, 1924, in Cincinnati, Ohio, to Louis William Kamman and Bertha Elizabeth (Miller).  They moved to Brownstown during the Great Depression, then Seymour, Indiana, where his sister Mary (Storbeck) and he attended Immanuel Lutheran School and Shields High School.  In first grade, Harold had Wry Neck and his mother home-schooled him for almost a year. He dedicated his life to sharing God’s love.  He attended Concordia College, Fort Wayne, 1941-45, grade 11 through two years of college.  He participated in ROTC training there.  He graduated Jan. 1945 and went the next day to Concordia Seminary, St. Louis, Missouri.  As a sophomore Jan. – May 1946, he taught 30 pupils in a one-room rural school at Trinity Lutheran, Vallonia, Indiana.  Years later, he had the joy of learning that two of his pupils had gone into fulltime church work, one as a teacher and one as a pastor.  In 1946 and 1947, he helped with a trailer mission program, setting up tents and folding chairs, canvassing towns and farms, gathering adults and children to services and Vacation Bible School. The parishes, Pastor Kamman faithfully served, include 1948-49 Trinity Lutheran Church, Monroe, LA. as a vicar to serve as pastor.  Following graduation on June 2, 1950, at Concordia Seminary, Saint Louis:  1950-57 Ordained Aug. 20.  Faith Lutheran Church, Abilene, Kansas.  The congregation organized 10/31/50 and the building he helped build was dedicated Jan. 1954. 1957-64 St. Paul Lutheran, Texhoma, OK.  Building dedicated 1963.  Also helped start Christ Lutheran in Elkhart, KS. 1957-64 Hope Lutheran, Boise City, OK.  Building dedicated 1962. 1964-75 Trinity Lutheran, El Reno, OK.  Started a Lutheran kindergarten.  Helped start churches in Mustang and Yukon. 1975-91 Good Shepherd Lutheran, Duncan, OK.  Retired July 1991. Pastor Kamman served as Circuit Visitor in Kansas and as Counselor in three circuits of Oklahoma. He served as vacancy pastor in White City, KS and Herington, KS, and in Oklahoma at Chickasha, Elk City, Guymon, Hinton, Kingfisher, Watonga and Weatherford. His wife Thelma (Dittmer) was a native of Independence KS, and served 1952-57 as secretary at Zion downtown.  The two met at a Walther League convention in 1956 and married on East Day 1957.  Her ministry in several parishes included starting a choir; making quilts for Lutheran World Relief; starting a kindergarten in El Reno; and participating in women’s groups, including the Lutheran Women’s Missionary League, for which she was district president 1992-1996 and prepared for the national LWML convention held in OKC in 2003.  She was a genuine treasure to Harold as wife and the mother of their two daughters, Ruth (1959-2005) and Lois (1961).  They have five grandchildren. Following retirement, he and Thelma joined St. John’s Lutheran, Moore.  There he served one year as “assisting pastor”, taking the duties of a vicar alongside Rev. Paul Hartman.  Pastor Kamman also served several parishes as vacancy pastor, one of them for 23 months.  Chickasha First Lutheran, Edmond Saint Mark, OKC New Hope, OKC Faith, Wellston St. Paul’s, Guthrie Our Savior, and Blackwell Trinity Lutheran. During his ministry, Pastor Kamman was privileged to serve as a member of various boards, including the Oklahoma District Lutheran Laymen’s League as promotion director; Oklahoma District promotion director for 30 years (1984-2013) for the Lutheran Church Extension Fund; the Oklahoma chapter of Lutheran For Life (1996-2016) and since 1994 a member of the board of directors of Lutheran Senior Citizens, Inc., the group that owns and operates Concordia Life Care Community.  He has resided there since May 21, 2007, and served as a chaplain to Concordia residents. From August 1959 through 1998 Harold Kamman was editor of The Oklahoma District Edition of The Lutheran Witness.  Most of those years he was also the director of public relations for the Oklahoma District of the LCMS.  Recognizing those nearly 40 years, the district board of directors held a banquet at a statewide pastors’ gathering in OKC to honor him, and presented a gift to Thelma and him:  they enjoyed a trip to the Holy Land with fifty Lutherans from Oklahoma!  In 1999 he prepared and published a 75-year history, Oklahoma District Diamond Anniversary. His family is impressed by Pastor’s dedication to fitness all his life, taking early morning jogs, swimming and bike riding.  He was rarely ill, except for the benign brain tumor in 1981.  He and Thelma loved travelling…to Germany to visit their exchange student Martina, to Hawaii, Alaska, the Mediterranean, to visit relatives, to attend Synod conventions (where they worked PR), and to enjoy LCEF biannual gatherings.   Pastor Kamman and Thelma were grateful for having loving parents who guided them in their faith; for being able to serve God in so many ways; and for leaving a legacy of children and grandchildren who imitate their giving nature. “And we know that for those who love God all things work together for good, for those who are called according to his purpose.” Romans 8:28 “Love one another as I have loved you. “ John 15:12