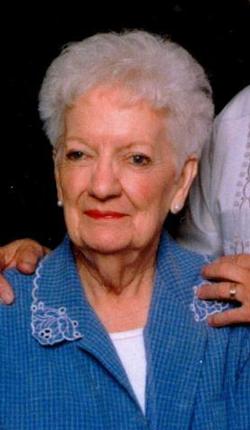 Helen Darlene (Cornelius) ThrowerHelen Darlene Thrower, 87, of Oklahoma City passed away August 30, 2013 in Oklahoma City, Oklahoma.Visitation will be held at Buchanan Funeral Home, 8721 N. Council Road, Oklahoma City on Sunday, September 1, through Tuesday, September 3, 2013 from 1:00 PM until 8:00 PM.Graveside service will be held at Arlington Memory Garden, N.E. 36th & Midwest Boulevard on Wednesday, September 4, 2013 at 10:00 AM with Mikeal Murray officiating. Fellowship to follow service. Location of the fellowship will be announced at the conclusion of the graveside service. Darlene was born in Humphreys, Oklahoma to E.T. (Connie) and Helen Cornelius on October 23, 1925. She attended high school at Central High School in Oklahoma City and graduated in 1944. While in high school, she was a member of the Black Skirt Pep Club, played mandolin in the Central High School Orchestra and was also a flag twirler.Darlene married her High School sweetheart, Bill Thrower, and the couple recently celebrated their 68th wedding anniversary. She worked many years as Librarian for the Putnam City School District at Western Oaks Elementary. Darlene loved her Central High School "Cardinals" and through the years has served as the treasurer and newsletter editor for the Black Skirt Pep Club Alumni. She also served as historian for the Central High School Alumni newsletter "The Sooner Spirit" for many years. Darlene loved to dance, sew and enjoyed traveling with Bill. When Bill retired from Western Electric, Darlene and Bill purchased a travel trailer and spent four years traveling!Darlene is survived by her beloved husband, Bill; son Terry; daughter Sherrie; and four grandchildren.Darlene has always been a source of strength to her family. Everything we are we owe to her. Our success in life is built on the moral, intellectual and physical education – we received from her. God could not be everywhere, therefore he made Darlene.The family wishes to extend their gratitude to Autumn Bridge Hospice for their loving care and support in her final days. Donations in the form of checks can be sent to Autumn Bridge Hospice, 3500 N.W. 39th street, Oklahoma City, OK 73112 noted: Helen Darlene Thrower.