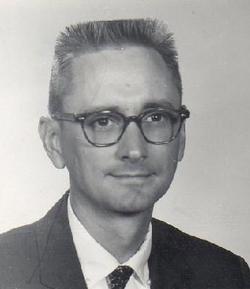 Obituary for Henry Charles Hand Jr.
On December 31, 2009, Henry (Hank) Charles Hand Jr., husband of Jane Millerlie since April 29, 1955, went to the Lord at age 82. Injuries incurred in an auto accident in 2003 hastened his departure from us. He was born September 1, 1927, in Chicago IL, the youngest of three children of Henry Charles Hand Sr. and Stephenia Funk. While attending Ebinger Elementary School and Taft High School in Chicago, Henry played the melophone and other instruments. He attained the rank of Life in the Boy Scouts and was a Senior Patrol Leader. He entered active service in the Army August 19, 1946, and served as a bandsman private first class playing French horn and piano in the 5th Air Force, 748th Air Force Band at the Nagoya/Komaki Air Base in Okinawa Japan. He was honorably discharged February 9, 1948, and was subsequently admitted to UCLA in California where he graduated with a degree in political science. During college he joined the Phi Kappa Sigma Fraternity and served as a chapter officer. He participated in theater during college and as a lead in amateur theatrical groups after graduation, served as an officer in the Jaycees, served as vice president of the Junior Chamber of Commerce in Evansville IN and regularly participated in a local radio show. In Oklahoma City, Henry was active in local school parent organizations where his children attended school and in Boy Scout Troop 552 with his son. In 1980 he served as Ward 4 Councilman in Bethany OK. His professional life began as a salesman with Liberty Mutual Ins. in Chicago IL. He was an outstanding salesman and was quickly promoted to manager of the Evansville IN office, then promoted to the larger Peoria IL office and in 1963 became regional manager in Oklahoma for a seven state area. Later he formed his own insurance brokerage from which he retired. He was a man of deep intellect and quite a character. He is survived by his wife of 54 years; son Jeff Hand in Oklahoma City; daughter Jane Pefanis, husband Harry and grand children Nick and Elisabeth living in Houston Texas; and his sister Elsa Shafer who resides in Arcadia California. Henry will always be loved and remembered by his friends and family. May he rest in Peace.
Visitation will be Sunday, January 10, 2010 from 3 to 5 PM and Monday, January 11, 2010 from 5 to 8 PM at the Funeral Home. Services to celebrate his life will be Tuesday, January 12, 2010 at 11:00 AM also at the Funeral Home. Burial will be at Ft. Sill National Cemetery.