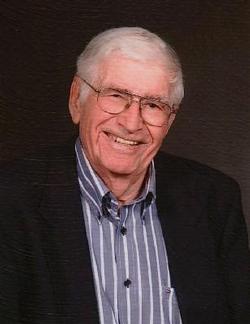 WENTZ,
Jack C., 80, a one-year resident of Quail Ridge Assisted Living Center in NW OKC, died suddenly at 8:10 a.m., Monday, April 4, 2011, in his living room. He was born August 2, 1930, in Pittsburgh, PA to Chester (Sr) and Dorothy Wentz. Jack was preceded in death by his parents and one son, Steve. He is survived by his wife of 60, years, Carol of the residence; son, James (Tina) Wentz of Richardson, TX; daughter-in-law, Laurie (Phil) Elzo of Chickasha; brother, Chet. Jr (Carolyn) Wentz of Peoria, IL; 4 grandchildren, Jonathan, Christin, David & Christopher Wentz; 4 nieces and nephews and seven grand-nieces and grand-nephews. Jack graduated from Wheaton (IL) Community H.S. in 1949, and from Michigan State University in 1955, majoring in animal husbandry, with a two year active duty tour with the Michigan Air National Guard immediately after H.S. as a medic at Luke Field, AZ. In H.S. he was a very outstanding outfielder for Wheaton&#39;s baseball team, known for hitting a long ball. He also played end on Wheaton&#39;s football team. After college, Jack was employed for his entire work career as a hog buyer for Wilson Meatpacking Company, serving at five different Wilson plant locations; Albert Lea, MN; Sioux Falls, SD; Sioux City, IA; Lincoln, NE and finishing off his longest work tour as head hog buyer at OKC. Jack was a strong and active Christian, serving the Lord as an elder and Sunday School Teacher at Metropolitan Baptist Church in OKC. He and Carol were also very active in the Gideon ministry over many years, particularly in calling on and visiting prisoners and witnessing to them of his strong saving faith in Jesus Christ, and handing out New Testaments and Bibles to prisoners. Jack loved his family and many friends and followed the activities of his children, nieces, nephews and grandchildren very closely. Even as a transplanted Midwesterner, he became a strong OU booster, but he never gave up his loyalty to his beloved Detroit Tigers baseball team, acquired as a boy, or his enthusiasm for major league baseball. Memorial contributions may be given to the Gideons International, or to his church, Metropolitan Baptist Church in Jack&#39;s name. Services to celebrate his life will be 3:30 pm, Thursday, April 7th at Metropolitan Baptist Church.