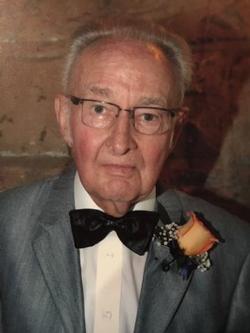 James Conrad Toepfer passed away Sunday, October 30, 2016 at Circle of Life Hospice in Springdale, Arkansas. Services will be November 12 at 10AM at Kingfisher Church of the Nazarene, Kingfisher, OK. He will be buried at the Kingfisher Cemetery.

James, the son of Gertrude and Ernest Toepfer, was born February 1, 1927, the 5th of 9 children. He served his country in the Army at the end of WWII, serving in Japan for 1 1/2 years.

He married the love of his life Darlene Tolman on July 29, 1948. After graduating from Bethany Nazarene College with a degree in Theology, James served as a pastor for a period of time; later leaving the ministry to work as an auto & tractor mechanic before

He received his Masters degree in Vocational education at Pittsburg State College. He taught for many years at Van Horn High School in Kansas City, Missouri. He continued his education throughout his career stopping just short of a doctorate.

James also loved to fish and was a skilled woodworker.

James and Darlene lived in Kansas City, KS for over 50 years and were faithful members of the Victory Hills Church of the Nazarene. James had an unwavering devotion to God which persevered to the end of his life. He is survived by his wife of 68 years, Darlene; two sons, Thomas and wife Riitta of Finland. Donavan and wife Beverly of AR. Grandchildren Eljas and Satu Toepfer of Finland and their sons Roi and Martin; Mirjam and Jerome Cascione of Michigan and their children Michael, Saara and Jonas; Johannes and Katja Toepfer of Finland their daughter Ester; Robyn and Clay Reed of AR, their two daughters, Elle and Riley; Brooke and Dewayne Taylor of AR, and their daughters Bailey and Hannah; Sommer and Bryan Cobb of AR and their sons Mitchell and Sawyer; three sisters, Naomi Tidwell, June Vogt, Martha Stagner, and brother Paul Toepfer.