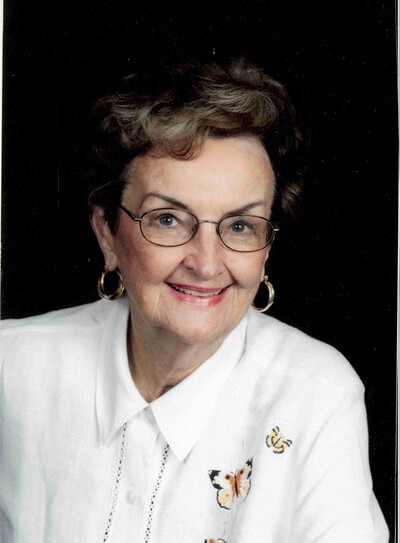 Our beloved Jean Ann Henry Coslett passed away peacefully on Saturday, February 5, 2022 at the age of 91. She was born in Oklahoma City to Gene and Ardeth Henry on April 17, 1930 and was the couple’s only child. Jean Ann is survived by her devoted husband, Verle Coslett, of the home in Warr Acres, OK, as well as two sons; Lonnie Coslett and wife, Lisa, of Maysville, OK and Bobby Coslett and wife, Julie, of Yukon, OK; four grandchildren and nine great-grandchildren; Trinette Duke and husband, Mark and their children Kennedy, Presley, and Evey Duke; Travor Coslett and his wife, Tecla and their children Townsend, Foster, and Banks Coslett; Shawn Coslett and his wife, Lauren, and their daughter Emma Coslett; and Alecia Symes and husband, Clint, and their children Heston and Kensley Symes; her life-long friend, Ruth Ann Ferguson, as well as a host of friends and family. She was preceded in death by her parents, Gene and Ardeth Henry.

At the age of six, Jean Ann began playing piano by ear and continued to study piano throughout her early childhood, developing her musical talent into a gift for all that heard her play. Her primary education began at Putnam City schools. At the end of her fifth grade, the family moved to Dover, OK where she attended school for several years before they relocated to Wichita, Kansas where she graduated from Wichita High School North. Jean Ann met her future husband, Verle Coslett, while she was a senior in high school and he was enlisted in the army. When he returned to Wichita and tried to locate her, the family had moved back to Oklahoma. He made the trip to Oklahoma City to reconnect and instead of reenlisting for another tour of duty, they were married a year later on May 2, 1953 at St Luke’s Methodist Church in Oklahoma City, OK. The newlyweds made their first home in Wichita, Kansas for a few years before returning to Bethany, OK and eventually bought their first home in Warr Acres, OK. As a young wife and mother, Jean Ann worked for several years at Pioneer Bell, the predecessor to Southwestern Bell and then AT&T. In 1970, Jean Ann and Verle relocated their family to Cedar Lake, a private community a few miles east of Hinton, OK where Lonnie and Bobby were enrolled in school. Verle and Jean Ann quickly became favorite school chaperones, band boosters, and volunteers and were active in the Cedar Lake community and chapel. During their time at Cedar Lake, Jean Ann attracted piano students traveling many miles to learn this instrument from one that could, quite literally, make the keys of a piano dance. She also joined a gospel group, the Gospel Gems and performed with them throughout Oklahoma in the early to mid-70’s. Verle and Jean Ann returned to their home in Warr Acres, OK in 1973 and her musicality and song writing continued to evolve. She formed the all-female trio, Eve, and continued as their band leader for 17 years. Jean Ann recorded an album with the Gospel Gems and followed with multiple CDs of piano instrumentals covering classic, country, gospel, easy listening, pop, and ragtime selections as well as her own original songs. She received multiple awards and accolades throughout her career in recognition of her musical talent, including Oklahoma Country Music Association’s Instrumentalist of the Year for four years in a row. She worked with numerous recording artists, such as Conway Twitty, Wanda Jackson, Bill Sullivan and others, played for the Oklahoma Square Dancing Association for many years, and served as pianist for her church, Putnam City United Methodist, for over 20 years.

Jean Ann was a blessing to all who knew her. She gave generously of her talent and her musical expertise. She was a loyal, giving, and steadfast friend. Jean Ann was a teacher that understood how to reach down and find the right connection to music for her students to embrace and carry with them always. She gladly shared her stage with the celebrity or an unknown artist. Verle was her partner, champion, and hero. Her sons were her light, her first priority, and her largest source of pride. Her grandchildren were, quite simply, her joy. Music was her passion and her offering. She will be missed by those that knew, loved, and cherished her.