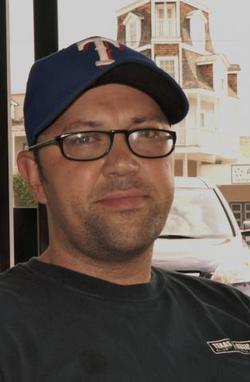 Our beloved Jeffrey Dale Merriman, aged 35, ran into the loving arms of his savior, Jesus Christ, on December 16th, 2014 after a courageous battle against cancer. He was born in Okarche, Oklahoma on Thanksgiving Day, November 22nd, 1979, to devoted parents, Dale and Connye Merriman. To know Jeff was to love him and he immediately became a favorite of his two sisters, Becky and Shelly. He later became big brother to Michael Randall. Growing up he loved playing baseball and spending time with his family. A greater Sooner fan you could not find. (Boomer!) He became a loving father to Austin Ray Merriman and he later joined the United States Air Force in June 2000. He soon after became a father for a second time to Hannah Elizabeth Merriman, his princess. While attending technical training, he met the love of his life Candace Renee Curry. However, their USAF commitments took them apart and it would 10 years before they would reunite. During those 10 years, Jeff was stationed at Kirtland AFB, NM, Tinker AFB, OK, and Osan AFB, Korea. Jeff was awarded the Air Force Commendation Medal, Air Force Achievement Meal with 2 oak leaf clusters, AF Outstanding Unit Award, AF Organizational Excellence Award, Air Force Good Conduct Medal, National Defense Service Medal, Global War on Terrorism Service Medal, Korean Defense Service Medal, AF Overseas Ribbon Short with 1 oak leaf cluster, AF Longevity Service with 1 oak leaf cluster, USAF NCO PME Graduate Ribbon, and the AF Training Ribbon. He was medically retired due to his first battle with brain cancer 2008, leaving a long trail of fellow Airmen touched by his charm, intelligence, wit and warm heart. He persevered and began seeking an information technology degree. In 2009, he found Candace again and in January 2011, they were finally able to be together. They became Team Mercury and he gained another son, Tanner Brannan. Jeff continued his IT training and became an employee of VendorSafe Technologies in College Station, TX. One of his proudest achievements was completing a year-long men's worship group through Covenant Family Church, learning what it meant to be a man of God and was awarded a sword for his journey. He also coached little league baseball and was always at the ready to rescue an animal. Team Mercury enjoyed many adventures together across Texas and had planned many more when the devastating news that the cancer returned came in March 2013. Jeff faced the beast head on knowing God was for him and was declared cancer free later that year. Sadly, the cancer returned a third time in October 2014 and God decided it was time to take his son home. Jeff had an unshakeable faith in Jesus and confidence in God's Word so we take comfort knowing that we will soon meet again. Jeff is preceded in death by his maternal grandmother, Norma Jean "Jeke" Thomason, Uncle Lloyd Smith, cousin, Tamara Smith, and Aunt Carla Seely;grandparents William and Willie Matt Merriman, Uncles Lonnie Ray Merriman and Charlie Ward Campbell.. He is survived by his wife Candace, son Austin, daughter Hannah, son Tanner, father Dale and his wife Brenda, mother Connye, Sister Becky and her wife, Adrian, Sister Shelly and her children, Cody and Jake, brother Mike and his girlfriend, Sandy Loper and their children, Aiden, Aslyn and Tommy, brother Jimmy Braine, sister Sally Braine, aunt Pat Smith, cousin Billy Smith and cousin Joey Seely,Aunt and uncle Betty and Jerry Reed, Aunt Garnett Campbell and more cousins than you can count,as well many loved ones from Candace's family and numerous extended family. In lieu of flowers, the family requests donations be made to the Wounded Warrior Project or your local no-kill animal rescue.