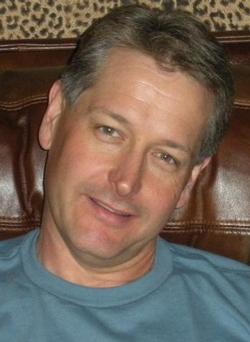 Jerry Wayne Wheat, Jr. claimed his promise of Heaven on Thursday, September 26, 2013. Jerry was born in Freeport, TX, December 11, 1963, to Carol Beth Newman and Jerry Wayne Wheat, Sr. He was joined 4 years later by his mischievous little brother Jimmy, who has been his best friend ever since.
Jerry's inquisitive mind led him to love math and science, and his heart led him to love music. He majored in music for 2 years before turning to engineering. His first degree was in electrical engineering and his second in civil engineering, where he spent the remainder of his career. He and his business partner, Don Sontheimer, formed Crosstimbers Environmental, working together for 14 years "without a cross word". Music remained an important part of his life through church music and his friends Joe Kennedy, Mark Kennedy, Russell Danner and Robin Wessel in A Trio of Five.
In 1991, Jerry married Jennifer Allen and together they built a home and a family dedicated to serving God and their community. Jerry took a love of cooking and developed into an accomplished chef. His "Perfect Bite" Christmas gifts were a favorite among his friends. Jerry and Jennifer's home has been a noisy, happy place filled with lots of kids and projects and music. Jerry treasured Jennifer and their three daughters, Rachael, Anna and Jennie. He was a loving example of a good Daddy to many of their friends and never hesitated to give time or money to make sure other children had the same privileges enjoyed by his own daughters. Jerry was a true romantic who loved to surprise Jennifer with unexpected gifts.
After being diagnosed with Glioblastoma Multiform, an aggressive form a brain cancer, Jerry became proactive in fighting his disease. His 11-14 month prognosis turned into 2 ½ years of quality time with his family. When questioned about the "whys" of his illness, he said, "The God of all Creation is, has always been and always will be in control. His will be done."
Jerry is survived by his devoted wife, Jennifer and daughters, Rachael, Anna and Jennie; mother, Carol Kaplita; father Jerry Wayne Wheat, Sr. (Linda); brothers, Jimmy (Kim) Wheat and Bryan Wheat; father and mother-in-law, Louie and Suellen Allen; sisters-in-law, Stephanie (Darin) Boyer, Heather (Dennis) Berry, and Cathy (Brian) Wandel; six nieces and seven nephews, who adored their Uncle Jerry.
To SolAmor Hospice, who brought encouragement and joy into the Wheat home on a daily basis, and to countless friends who made praying for Jerry a priority, Jennifer, Rachael, Anna and Jennie say a heart felt thank you.
A Celebration of Jerry's life will be Monday, September 30th, at 11:00 at Putnam City Baptist Church. Family visitation is scheduled for 3:00 to 5:00 at Buchanan Funeral Service, 8712 N. Council Road. In lieu of flowers, Jerry requested that any donations be made to the music ministry of Putnam City Baptist Church.