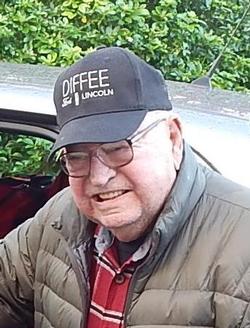 John was born in Lawton, OK to Oscar and Nora (Franklin) Goodin. He proudly served in the US Navy and was a member of the Seabees building the airstrip the Enola Gay took off from ending the war. John ran the dairy in Lawton until he sold the dairy cattle in 1970. He and his wife Patti then opened the Big Top Deli in the Central Mall until it was sold. He and Patti were roving managers for Motel 6 until their retirement when they moved to their home at Lake Eufaula. They received numerous awards and trips for their outstanding performance at Motel 6. John was an avid fisherman and was his happiest sitting on the dock fishing with his many friends and family. If you needed help finding the fish on Lake Eufaula he was the one to go to. He knew when and where the fish would be biting and when to just sit on his dock and enjoy good company.

He was preceded in death by his parents and his wife. He is survived by a son, David "Dave" and his wife Jill Goodin; daughter, Sandra "Sandy" Crow; 4 grandchildren, Scott Crow, John Goodin, Samantha Goodin and Robert Goodin; 2 great grandchildren, Scottie Crow Marchessault and Evan Goodin; 2 great-great grandchildren, Brayden Marchessault and Gunner Jay. John will be sorely missed by both his family and his many friends. But as he rests from his long life's labor, this great husband, father, grandfather and friends should know that he has made his family proud. The world is most definitely a better place because of John Goodin and greater than the sorrow from his death is the joy that he spread in his life. Visitation will be from 1-8 PM, Tuesday, December 20, 2016 at Buchanan Funeral Service. Services to celebrate his life will be at 1:00 PM, on Wednesday, December 21, 2016 at Westside Christian Church, 10145 NW Expressway, Yukon, OK. Burial will follow in Resthaven Memory Gardens.