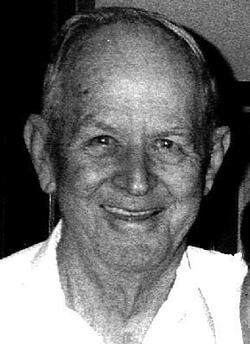 Buchanan Funeral Service in Oklahoma City is handling arrangements. Family visitation will take place from 5 to 7 p.m. Thursday with viewing available from 8:30 a.m. to 8:30 p.m.

Born during the Spanish flu pandemic of 1918, he was premature – weighing in at two lbs. – and the doctor did not issue a birth certificate, thinking he would not survive.

&quot;Junior&quot; was the oldest of six children who grew up on the family farm in Mena. His Arkansas National Guard unit was activated when World War II began as the 365th Field Artillery Battalion. That unit traveled to Europe and marched through France, Belgium and Germany with Patton&#39;s Third Army. After victory in Europe, his unit was ready to travel to the Pacific Theater when the war ended.

As a &quot;90-day wonder,&quot; he made the Army a career, stationed stateside at Camp Bowie Texas, Fort Hood, Texas, and Fort Sill, Okla. and internationally in Germany, Korea and Vietnam. After retiring from active duty as a major, he worked in civil service at Fort Sill&#39;s Gunnery Department for more than a decade. After retirement, he and his wife lived in Orlando, Fla. for 10 years and San Antonio for 15 years before moving to Norman in 2001 to be closer to family.

An avid and passionate golfer for decades, he won the San Antonio Senior Men&#39;s Open in his age group for 10 consecutive years.

He wed Mary Helen Jones on Oct. 27, 1940 in Mena and they were married for nearly 69 years before she passed away in July 2009. After moving to Norman, he enjoyed attending his great-granddaughter&#39;s Norman North soccer games and the University of Oklahoma women&#39;s basketball games.

Preceded in death by his wife, Mary Helen, and his siblings, Dorene, Julia and Dalton, he is survived by his brother, Norman, of Hot Springs, Ark. and his sister, Marie, of Heber Springs, Ark.; his daughters, Sharon and her husband, Jim Brickman, of Norman, and Diana and her husband, Bob Williams, of Oklahoma City, as well as five grandchildren, Jamie Brickman and Stefanie Brickman of Norman, Kristin Hulin of Tulsa, Bobby Williams Jr. of Yukon and Jonathan Williams of Travis Air Force Base, Calif.; 11 great-grandchildren, Erin, Madison and Jordan Brickman, Jake and John Brickman Hulin, Bradley, Emily, Macy, Jackson, Sylvia and Chloe Williams; and numerous nieces, nephews and cousins.

The family thanks the staff at the Gardens of Rivermont for the kind and loving care provided. In lieu of flowers, contributions may be made to the American Heart Association, Hospice of Oklahoma County or a charity of choice.