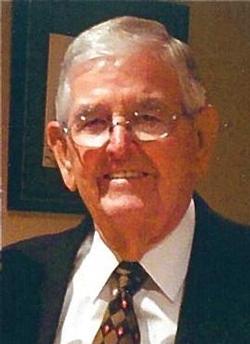 J.R., age 90, lost his battle with lung cancer on May 28th, 2012, at his home in Oklahoma City, surrounded by his wife, Carol and family. Born on May 15th in Hess, Oklahoma to Loris and Roger Brown, he was the second of five children.

J.R. graduated from Elmer-Hess High School in 1940 and continued his education at OU. In January of 1943, he suspended his education at OU to enter the Navy. He met Betty Rose in 1943 at a USO dance in San Diego, and was married on March 4, 1944, in San Diego, California. They settled in Oklahoma City in 1947 and raised three children. J.R. and Betty were happily married for over 60 years until her death on October 5, 2004. He married Carol Garrison in 2006 and was adopted by her family. They were constant companions and they spent the last 6 years enjoying traveling and life together.

J.R. Brown owned and operated the Phillips 66 gas station at 36th and Shartel for over 10 years and ended up retiring from Premier Autoware Corporation. J.R. loved playing golf with his family and friends and his favorite baseball team was the N.Y. Yankees. He was a member of the LDS Church and loved doing missionary work and recruiting new members to the church and taking the missionaries on their appointments.

He was preceded in death by his parents, his two brothers Calvin and Dale, and his sister Virginia. He is survived by his brother, William, and family from Harrold, Texas. He is also survived by his wife Carol; his children, Gary and Evonne Brown and their children, Tori and Todd Brown. Dennis and DeAnn Brown and their children Mark, Greg, Katy and Jacob Brown. Tammy and Bob Posey and their children, Matt, Ben and Jessica. He's also survived by 9 grandchildren and 10 great grandchildren and a host of nephews and nieces. The family wishes to thank Physician's Choice Hospice for their kindness and care of J.R. in his latter days.

In lieu of flowers, contributions can be made to: LDS Missionary Fund, 12020 Mustang Road, Surrey Hills, Yukon, Oklahoma 73099.

J.R. will be remembered for his patience and kindness and will be missed by all.