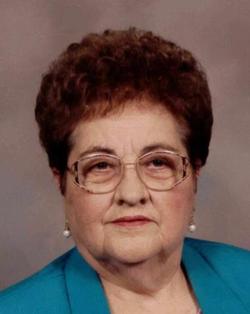 Julia Mildred Weber, a former resident of Duncan for almost 60 years, died Thursday, February 26 in Oklahoma City. She was 93.

Mildred was born on the 160-acre family farm south of Verden, Oklahoma on January 1, 1922. She was the eldest daughter of Jerry and Susan Robinson and was preceded in death by her parents; her husband, James S. Weber of Duncan in 1994; her brother, Jerry W. Robinson of Cincinnati, Ohio in 1997; and her sister, Thelma Fern Daniels of Midwest City in 2013.

Mildred attended a one-room grade school called Elderberry for her first eight years (she was the only student in the eighth grade), and then finished school at Verden High School, in a graduating class of eighteen students. She rode a horse named Daisy, her father's mare, to and from school in the tenth grade. Oh, the stories she could tell about those days on the farm and the occasional runaway horse!

Millie loved her family and homemaking, but when her children reached college age she joined the workforce. She retired after 22 years as fashion merchandise manager for women at Montgomery Ward in Duncan and she later worked for three years for JC Penney in a similar capacity. She was a member of the business and Professional Women's Association during that time and was also a member of a social/philanthropic sorority, Epsilon Sigma Alpha for more than 25 years

Mildred was an expert seamstress; loved sewing, her flowers, music, reading, and gardening, as long as she was able, and she bought crossword puzzle and word-circle books by the case in her later years to keep her mind active.

She was a faithful member of The First Baptist Church of Duncan for fifty-seven years, until she moved to Oklahoma City to the Baptist Village assisted living campus in 2008. She was a resident of the Bellevue Nursing Center in Oklahoma City since 2012.

Graveside service will be 2:00 p.m., Tuesday, March 3 at Memory Lane Cemetery in Anadarko under the direction of Buchanan Funeral Service of Oklahoma City.