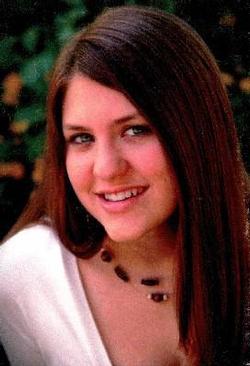 Julie Carol Christiansen went home to be with the Lord October 31, 2009, after a long battle with Hodgkin's Lymphoma. Julie was born January 11, 1988 in Oklahoma City to Lance and Victoria Christiansen. She was a 2006 graduate of Putnam City High School. Julie was a talented musician who played both piano and oboe. She was a 6-year National Piano Guild member of the American College of Musicians and won numerous trophies at various piano competitions. Julie was also a member of other musical groups including Putnam City High School band and Oklahoma Youth Orchestra where she participated in their 2004 European tour. Julie was a member of Quail Springs Baptist Church where she was active in the youth group, children's ministries, music programs and college ministry. She had a special love for children, working in the nursery and at several church camps, but particularly enjoyed rocking the babies. Julie was a devoted mommy to her precious son Aiden Michael Christiansen, who survives her. Julie is also survived by her parents, Lance and Vicki, brother David Christiansen of Stillwater, OK, Grandparents Ben and Wilma Lacy of Drumright, OK and Doris Christiansen of OKC, Aunt Karen Lacy of Tulsa, OK, Uncle Mark Christiansen of OKC and numerous other great- aunts and uncles and cousins who love her.
The family requests that memorials be made to Quail Springs Baptist Church Children's Ministries. Visitation is Wednesday 8:30 a.m. to 8:30 p.m. at Buchanan Funeral Service. Services will be at 2:00 p.m., Thursday, November 5, at Quail Springs Baptist Church, Oklahoma City, OK, with burial at Resurrection Memorial Cemetery.