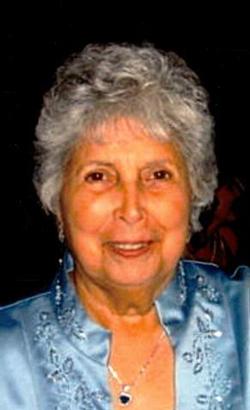 June Albright McGuire, nee Nora June Baker, continues her life in heaven. She entered the Eternal Presence of her Lord and Savior at the age of 83 on May 6, 2013 around 8:30 p.m. at Deaconess Hospital. She was surrounded by her loving family as she made the transition.

June was born March 9, 1930 in Ada, OK to John W. & Nora Huddleston Baker, six years after her sister, Virginia Alice's birth. During some of The Great Depression years, June lived with her family on the farm her mother received as an "Indian Allotment" for being a member of the Choctaw Nation of Oklahoma.

June was baptized into Christ as a teen at Southwest Church of Christ in Ada. Graduating from Ada High in 1948, she was a member of the class known as The Golden Great of '48. After attending a year at East Central University in Ada, she married her high school sweetheart, Glen A. Albright.

Following Glen's graduation from East Central, they moved to Kansas City, MO where June worked as an administrative assistant at a fertilizer manufacturer while Glen was obtaining a degree from the University of Missouri at Kansas City School of Dentistry. Afterward they moved to Terre Haute, IN where he was an officer in the United States Public Health Service Commissioned Corps as a dentist at the Federal penitentiary located there.

In 1959, June moved with Glen, their son, Russell (b.1952), and daughter, June Elaine (b. 1953) to Ardmore, OK to open a dental practice. She worked in the practice as a dental assistant, receptionist and bookkeeper. As the practice thrived she decided to go back to college. First, at Murray State College in Tishomingo, OK; and then at Southeastern Oklahoma State University of in Durant, OK. During this time she had another son, Donovan (b. 1962).

In Ardmore, June was active at the Central Church of Christ, the Maxwell Avenue Church of Christ, Jaycee Jaynes, several bowling leagues, Cub Scouts (as a den mother), little league baseball which turned into a life-long love for the St. Louis Cardinals and supporter of all sports at Ardmore High. As an avid University of Oklahoma Sooner fan (dating back to her uncle Woody Huddleston's star years on the OU football team in the 40s) it was a dream come true to graduate from OU with a degree in Psychology in 1979. As an aside, she spent a summer studying at a university in Mexico.

In December of 1979, tragedy struck when a car accident cut short Donovan's life at age 16. (In September, 1988, tragedy would occur again for June. Her grandson, Graham, returned to be with God at the age of 5 as a result of a church hayride accident).

June continued her studies and graduated in 1981 with a Master in Education Degree at the University of Central Oklahoma. After an interim job at an Indian Clinic, she found her calling at The Referral Center, an alcohol and chemical dependency rehabilitation clinic in Oklahoma City that had recently opened. Eddie McElroy, Director of The Referral Center, (for all but one year while June was there) recognized her talent and spirit and quickly elevated her to the management team where remained an integral part for more than 20 years. In her early seventies she left as Director of Out-Patient Counseling. She was respected and loved by the staff and the patients, many of whom continued contact with her.

June loved to travel and multiple trips to England, France, Germany, Italy, Switzerland, Austria and Mexico. After retiring, and after Glen entered heaven in 2005, she met a widower, James T. McGuire, from Tulsa. At 76, June married Jim the summer of 2006 and remained married to him until his death in September 2012. They lived in Tulsa, OK and then Jenks, OK. They had a home at Grand Lake for several years.

During her marriage to Jim she traveled in the U.S.A with trips to Arkansas, Missouri, Texas, Nevada and all over southern California. After Jim's death, June returned to her home in Bethany, OK where she resided until her transition to her current life.

June was a lifelong, active member of the churches of Christ wherever she lived. She was a member of a congregation in Ada, Rush Springs, Ardmore, Bethany, Oklahoma City, Tulsa and Glenpool all in Oklahoma. She also was a member in Kansas City, Mo and Terre Haute, IN when she resided there.

(Apologies to the Baker clan I could not find the list. (RGA))

June was predeceased by her: