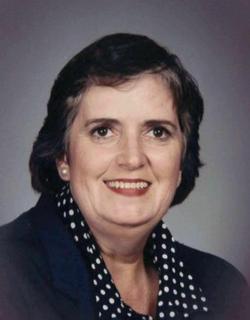 Kathryn Jane Jones, age 75, died March 2, 2015. She was born March 12, 1939 in Ponca City, OK to Loren W. and Eliza Jane (Turley) Myers. She was a member, and the Church secretary at University Church of Christ in Conway, AR, and Soldier Creek Church of Christ in Piedmont, OK, where she retired. She was preceded in death by her parents, her sisters Carole Line and Nancy Myers, and brother Craig Myers. She is survived by her loving husband, R.D. Jones; son Robert, his wife Andi, and their children Melanie and Robby; son Richard, his wife Lori, and their children Keith and his wife Felicia, Kimberly, Jacob, Michael, and his wife Josie; and son Robin, his wife Diana, and their children Joshua and his wife Jamie, Rachel, and Joseph, as well as four great grandchildren, Logan, Isabella, Luke, and Lennon. She is also survived by 2 brothers, Keith Myers and Hugh Myers. Kathryn's life was dedicated to her family, and the work of the Lord. During her time as a house-parent at Turley Children's Home in Tulsa, OK during the 1960s and 70s, she guided and mentored many young people through difficult periods in their lives. As her own children got older, she instilled within them that same love of the Lord, and respect for others. Visitation will be Thursday, March 5, 2015 from 1-8 PM at Buchanan Funeral Service. Services to celebrate her life will be 11:00 AM Friday, March 6, 2015 at Soldier Creek Church of Christ in Piedmont followed by a private family committal service.