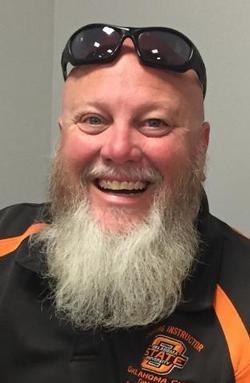 Ken Qualls passed away unexpectedly November 5, 2015. He was born in Oklahoma City on January 14, 1967 to Wendell and Fern Qualls. After graduating from Lindsey High School he joined the United States Marine Corps in 1985. After his discharge in 1988 he started his career in law enforcement at the Oklahoma County Sheriff's Office. In 1993 he married the love of his life, Angela Thorson. He continued his law enforcement career over the years at Spencer Police Department, Kingfisher Police Department, Kingfisher County Sheriff's Office, Piedmont Police Department and spent the last several years as a defensive driving instructor at OSU-OKC.

He and Angela were blessed with two sons; Jarred and Blake. Those four shared many fun times, vacations and weekend trips. Ken loved being a dad. He supported his sons and wife in Boy Scouting and was very proud of watching Jarred in the PC North marching band. Besides being a devoted family man, Ken had many interests; he was a proud member of the Bald is Beautiful crowd as well as lately he was the subject of those with beard envy. He loved flying, was a Master Mason, he reached the 1st level Black Belt Hakko Ryu Jujitsu, and just recently started teaching himself how to play the banjo. He was an avid supporter of OSU basketball and football..orange became his favorite color.

He is preceded in death by his father, Wendell Qualls, and great-nephew Eli Davis. He leaves behind his beloved wife, Angela and sons, Jarred and Blake. His mother, Fern Qualls, sisters; Brenda (Adrain) Snider and Beverly (Alan) Davis. Nieces and nephews; Paul (Andrea) Davis, Chad (Janelle) Davis and Lara Davis, Joshua and Daniel Snider and Breanna Cook. Great nieces and nephews; Zachary, Tanner, Jackson, Benjamin and Bella Davis. He leaves behind a multitude of cousins and friends who were important to him and shared a part of his life.

Kenneth will always be thought of in several ways; an amazing husband, a wonderful and devoted father, funny brother, loving son, silly uncle, and loyal friend. Wherever he went, his contagious laughter and gregarious personality filled the room and brought smiles and laughter to all.