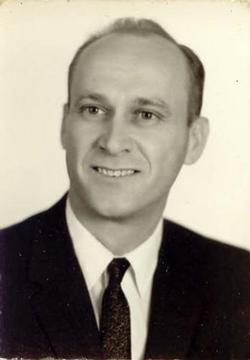 HEATH,
Larman Jefferson passed away October 27, 2008. He was born in a log cabin on a farm near Poughkeepsie, AR. on December 25, 1916 to Wesley P and Dollie Norris Heath. At the age of four he moved with his family to a farm near Wayne, OK. He graduated from Wayne High School in the spring of 1935, and entered the University of Oklahoma that fall. While at OU, Larman participated in the Reserve officer Training Corps (ROTC) and was commissioned a Second Lieutenant of Field Artillery in 1939. He graduated from OU in 1940 with a Bachelor of Science degree in Mechanical Engineering. While at OU, Larman met his future bride, Mary Ruth Culbert and they were married on June 9, 1941. He was employed by a petroleum engineering consulting firm until called to active duty on July 7, 1942, and assigned to the Army Air Corps. He left for Europe on September 5, 1942, where he served until October 10, 1945. Hewas discharged from active duty on January 16, 1946. He transferred to the Corps of Engineers and remained in the reserves until retirement in 1976 as a Lieutenant colonel. After World War II, Larman was employed as a petroleum engineer, both in the field and in oil and gas consulting offices, but primarily as a petroleum production research engineer. He joined the Department of Energy, Bartlesville Energy Technology Center, formerly the Bureau of Mines Experiment Station, in February 1953. He remained there until his retirement in December 1979, with the exception of the time he spent as valuation engineer with the Bureau of Indian Affairs, Muskogee, OK from 1955 to 1960. After retirement, Larman and Mary Ruth continued to live in Bartlesville until November 1997 when they moved to Oklahoma City. Larman was preceded in death by a son, Joseph Alfred Heath, his parents and all his siblings, Dexter, Chester, Palmer and Monroe Heath, Vallie Mize, Alberta Chamblee and Virgie Boler, and a sister and a brother who died in childhood. He is survived by his wife, Mary Ruth Heath of the home; daughter Elaina Ellis and husband David, Oklahoma City; sons, Jeff Heath, Phoenix, AZ, and John Heath and wife Julie, Edmond; four grandchildren, Nathan Ellis and wife Shelly, Norman, Steven Ellis and wife Cali, Santa Monica, Ca, Mary Caroline Ellis, Bloomington, IN, and Amy Heath, Oklahoma City; great grandchildren, Kylie and William Ellis and Gabrielle and Jacob Coleman, Norman; three sisters-in-law, Neva Heath and Norene Tower, Norman and Ruby Culbert, Ada , and many nephews, nieces and friends.
Visitation will be 6 to 9 PM, Wednesday. Services will be 10:00 am, Thursday, October 30 in the Buchanan Funeral Home Chapel, 8712 N. Council Road, Oklahoma City, with interment in Memorial Park Cemetery.