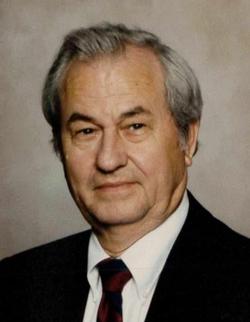 Lawrence Tate, age 88, son of Laura and Wilbur Tate, went home to be with the Lord December 25, 2014. Lawrence served our country in the Navy in WWII. He retired from Burlington Northern Railroad where he was an Agent for 39 years. He is survived by his loving wife of 68 years, Robbie Tate. Lawrence was a longtime member of Baptist Temple Church. He was Worshipful Master of Cyril Masonic Lodge and a member of Amity Lodge. In 1989, he was the Potentate of the India Shrine Center. Lawrence is survived by his wife Robbie; son, Larry Tate and wife, Kathy; daughter, Susan McCollum Tate; grandchildren, Dustin, Savanah and James; great grandchildren, Maddy and Eli. He is also survived by his brother Tim Meredith and wife, Janie; and many loving nieces, nephews and extended family. Visitation will be Tuesday from 9 AM to 2 PM at Buchanan Funeral Service. Services will be at 2pm Tuesday, December 30, 2014 with Masonic Rites and Military Honors at Buchanan Funeral Service, 8712 N. Council Road, OKC, OK. Honorary casket carriers are Past Potentates of India Temple. In lieu of flowers, the family requests donations be made to Shrine Transportation Fund, 3601 NW 36th, OKC, OK 73112. The family would also like to thank Integris Hospice House staff for their wonderful care.