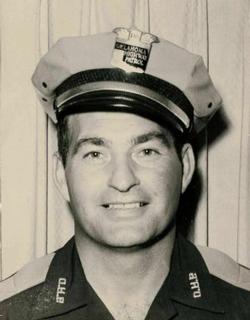 On December 23, 2014, Lee Francis Sardis departed from the arms of his loving wife of over 60 years and went home to eternal rest with our Lord Jesus Christ. Lee was born on November 3, 1923, in Wilburton, Ok, son of Ralph and Fannie Sardis.

He attended Eastern State College at Wilburton, in 1946, and later was employed as a field engineer by Sinclair Coal Company. While waiting to enroll in Oklahoma Highway Patrol School, he worked as a dispatcher for the Highway Patrol at McAlester. After completing Oklahoma Highway Patrol Courses at the University of Oklahoma Extension Center, on July 29, 1949, he was assigned Trooper #155, and commenced highway patrol duties in Frederick, OK.

On May 2, 1952, he married the love of his life, Corrine Houck. The marriage was officiated by Rev. R.T. Williams, Jr. Oklahoma Highway Patrol Chaplain, also known as "The singing pastor."

Lee retired from the Oklahoma Highway Patrol in 1969. From 1969 to 1989, he was in the retail business in Muskogee where he owned and operated Lee's Men's Wear and Sardis Shoes. He was a member of the Retired Oklahoma Troopers Association and Associate Member of the College of the Ozarks. In his spare time, he enjoyed working with wood and making furniture for family members and friends. His hobby was cooking, especially baking bread to share with others. He enjoyed watching OU football and entertaining friends and relatives. He was a very generous man with a pure heart and always found ways to help family members, friends and fellow troopers.

Lee was a member of St. Joseph Old Cathedral Catholic church and attended Mass at St. Joachim chapel at Saint Ann's Retirement Center, where he resided since July, 2010. He is survived by his devoted wife and a sister, Gloria Overlease. He was preceded in death by brothers John and James, and a sister, Angelina Adams.

In Lieu of flowers please make donations to the Catholic Charities. Viewing at Buchanan Funeral Service, from 1:00 PM to 6:00 PM, December 26, 2014 with the wake at 6 PM. Mass of Christian Burial will be celebrated 10:00 AM, Saturday, December 27, 2014 at St. Ann's Retirement Center Chapel with burial to follow at Resurrection Memorial Cemetery with honors. Immediately after burial services, family members and friends are invited to a reception at Buchanan Funeral Service.