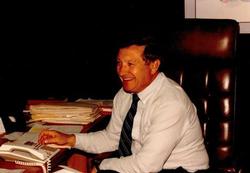 Les Belinski was born Feb 9, 1933 in Weyburn, Saskatchewan, Canada to William and Sophia Belinski. He attended H.S. at Central High where he participated in baseball, basketball and Track and Field where one of his records still stands. Les was active in Football, where he played quarterback, as well as, halfback and kicker. He was selected for the HS All Star Team. He was among one of 15 students selected in Canada to attend Engineer Training at Okla. University specializing in Petroleum Engineering. He learned how to play golf while in college and met many of his friends playing golf in many oil field sponsored tournaments as well as walking his dog "Woofles" while walking the course. He received further training in natural gas engineering. It was at OU where he met the love of his life, Cliffa English and married on July 12, 1958 at the 1st Presbyterian Church in Duncan, OK. As an engineer, he worked in several locations in Texas and Oklahoma with Midwest Oil Corp. as district engineer. In 1974, je joined Mustang Oil CO where he was appointed VP of Production. In 1987, he joined Grand Production Co. Les was a member of the American Petroleum Institute of Mechanical Engineers and the Association of Professional Engineers and remained active in oilfield production his whole life. After working in the states for several years, they moved to Calgary, Alberta where they had 2 sons, Brian and Jeff. After 10 years in Canada, the family moved back to Yukon, OK. Our beloved Les was a deeply Christian man, a loving father and husband. He was very active and involved with his sons and grandsons, serving as a Christian example of loving-kindness, morality, and work ethics, giving all the glory to God and Our Lord Jesus. He is survived by his wife, Cliffa; 2 sons, Brian and Jeff; 5 grandchildren, Ryan, Brandon, Jeremy, Craig & Jason; 5 great-grandchildren and a sister, Elizabeth Toth. He will be greatly missed by all that knew him. Services to celebrate his life will be 10:30 AM, Friday, Sept. 13 at Buchanan Funeral Service Chapel.