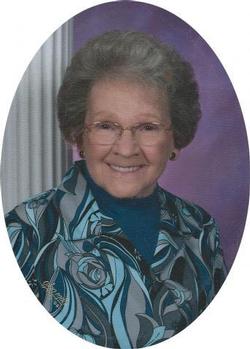 LEMEN
Lily Mae, age 89, of Oklahoma City was born May 4, 1923 in Andes, MT. to Lois G. and Asa H. Hall. She was the 3rd of six daughters. She moved to Unionville, MO in 1940 and graduated from Unionville High School in 1941. She married Hyle Lemen on Dec. 11, 1941 and they had 4 children, Karen, Deanna, Jan and Jeffrey. Hyle was a radio engineer and his job required the family to move frequently. Lily worked in retail sales, as a county clerk, owned and operated a connivance store and managed an apartment complex in Muskogee, OK for 16 years. She retired at the end of 1989. She moved to OKC in 2010. In retirement she maintained a beautiful lawn and sewed for her children and grandchildren. She gave herself a goal of 30 quilted lap robes and countless flower arrangements to distribute to the Muskogee Nursing homes each Christmas. She was active in her church and prepared meals and quilts for church members. In the 1970's when double knit began going out of fashion she began making comforters. People gave her their unwanted fabric and she made countless comforters for family, friends and people in need. Over the years she has made heirloom quality quilts which became special gifts for family members. In the last two years, she made lap robes and flower arrangements to sell to supplement her income. Many of the residents of her retirement center asked her to make baby blankets for great grandchildren. She was preceded in death by her husband, Hyle, grandson, Jerrell Boggan and 3 of her sisters. Lily is survived by her children: Karen and Jerry Boggan of Skiatook, OK; Deanna and Larry Canole of Gower, Mo; Jan and Ken Kreuzberg of Yukon, OK; and Jeff and KayAnn Lemen of OKC; 4 grandchildren and 7 great-grandchildren. Services to celebrate her life will be 10:00 AM, Thursday, January 17, 2013 in the Buchanan Funeral Service Chapel. Interment will be 3:00 PM, Thursday, January 17, 2013 at Memorial Park Cemetery in Muskogee, OK.