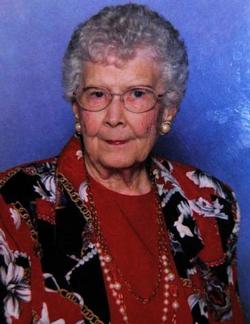 Margaret Warren Borgelt Snodderly was born July 20, 1918 on a farm south of Beverly, KS to Edwin and Lydia (Ricord) Warren. She passed away March 7, 2016 at Concordia Life Care Community, Oklahoma City, OK, where she has resided for the past 8 years. She attended school in Beverly, KS, graduating from high school in 1936. Margaret married Earl Borgelt of Zenda, KS on Dec. 25, 1937. They were both school teachers in Lincoln County at the time. After living in several communities in Kansas, along with occupational changes, they retired in Hutchinson, KS. They traveled full time for 18 years with an Airstream trailer until Earl's death in October, 1986. Margaret married James Lawrence (Larry) Snodderly of Topeka, KS October, 1992. They wintered in Texas and the rest of the time were at home in Topeka, KS.

Margaret was a homemaker, Sunday school teacher, President of American Business Woman's Association of the Hutchinson KS. branch, and Medical Secretary. She always needed to keep her hands busy and did all kinds of handwork and made many donation quilts and was always thinking of something good to cook. She loved to spend time with her family and her family always loved to have her with them.

Funeral service will be at Buchanan Funeral Services at 2PM, March 14, services will be conducted by Rev. Fred Muenchow, interment will be at Monroe Cemetery, Beverly, KS., March 15, 2016 at 2pm.

Memorial contributions may be made to Women's Resource Center, Norman, OK.