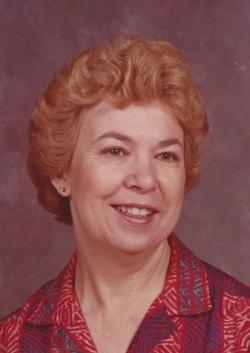 Marie Helen Fairchild passed away in the early morning hours on Sunday, January 15, 2017 at home surrounded by her loving family. She was born Marie Helen Fairchild on November 30, 1937 in Corpus Christi, Texas to Locie Marie Fairchild and Bertram Harry Fairchild. She is survived by her husband of 57 years, Warren Wilton Henson, Jr., son Warren Wilton "Skip" Henson, III, daughter, Heather Ann Henson, son, Craig Douglas Henson and wife Mary Beth Henson and step-daughter Molly Patterson, brother Bertram Harry "Pete" Fairchild, Jr. and wife Patti Fairchild, nephew Paul Fairchild and niece Sarah Fairchild as well as special cousin Kay Emery and numerous other relatives. Marie had a sweet spirit and loved her family, relatives and friends deeply. Marie was a lifelong member of P.E.O. She was a career teacher and full time parent. She graduated in 1955 from Liberal High School in Liberal, KS and after spending one year at Cottey College in Nevada, MO graduated with a degree in education from the University of Kansas in 1959. Marie taught and fostered many successful students in OKC at Tulakes Elementary and throughout southwestern Kansas. The family would like to thank everyone who dropped in over the years to pray for, assist and support the family during Marie's convalescence. Special thanks are due to Mercy Hospice and caregivers Sharon King and Latoya Coverdale, amongst many others. Services will be held at Grace Methodist Church, 6316 N. Tulsa Ave, OKC at 2:00 p.m. on Thursday, January 19, 2017 with a graveside service at Resurrection Cemetery, 7801 NW Expressway, OKC following. A viewing will be held at Buchanan Funeral Service from 1:00 p.m. to 8:00 p.m. on January 18, 2017 with the family greeting visitors from 6:00 p.m. to 8:00 p.m. In lieu of flowers donations can be made in Marie's memory to The Memorial Fund for Grace United Methodist Church, 6316 N. Tulsa, OKC 73112.