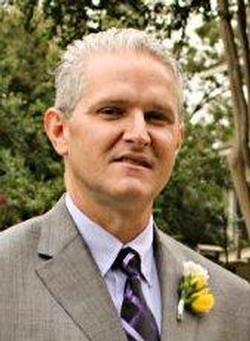 Matthew Vinson Van Horn, 48, went to be with his Heavenly Father on January 23, 2013. Matt was born in Houston, TX to Betty and GW Van Horn. He attended El Reno schools, where he set the pole vaulting record for the Etta Dale track team, and continued to excel in the sport at Nashville High School in Nashville, AR where he graduated in 1983.
Matt's family was the delight of his life, and he was the light in theirs. He had a way of touching the lives of everyone he met. His passion was helping others, which was apparent in all aspects of his life. He was hired at the Community Action Agency of OKC in 1999 to coordinate the Youth Build program, which gave troubled teens the opportunity to fulfill community service hours by working on houses in poverty-stricken neighborhoods. In his most current position with the agency, Matt was Weatherization Coordinator, preparing homes for extreme weather for the elderly, disabled, and families with young children. He served on the OK Weatherization/Housing Advisory Council, was a member of New Covenant Christian Church, and an avid Sooners fan. Matt's service and dedication to the community and his kind, compassionate soul will be greatly missed by all who knew him.
Matt is survived by his wife of 14 years, Lu, and son, Aaron, of Oklahoma City; daughters Vicki Niles and Lauren Collins, grandchildren Cadence, Isabella, and Matthew of Hot Springs, AR; his parents GW and Betty Van Horn and brothers Mitch and Mike of El Reno; and brother Mark of Hurst, TX.
Services for Matt will be held at New Covenant Christian Church in OKC on Saturday, January 26, 2013 at 11:00 a.m.
In lieu of flowers, the family suggests donations be made to the Aaron Van Horn Education Fund at Weoke Credit Union.