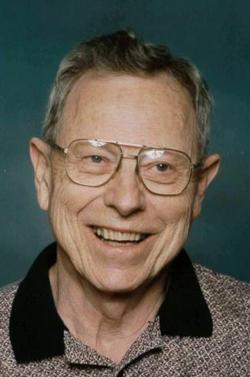 Melvin was born on February 10, 1934, in Bosworth, Missouri, to Russell Nowland and Esther Marie Winfrey Nowland. His family moved around a lot while he was growing up, but he ultimately graduated from Cushing High School in 1952. He was active in the Boy Scouts of America, achieving the highest rank of Eagle Scout. He attended Phillips University where he met his wife of 49 years, Vera Mae Clark. They were married on December 19, 1954. He was employed at Western Electric in 1959 as a cabinet maker, then he worked his way through various plant trades positions before becoming an Associate Engineer. When he retired after 30 years of service, he then dedicated himself to his philanthropic endeavors. He is survived by his son, Russell Nowland and wife Diana; son-in-law, Rev. Paul Calkin and wife Rev. Jeni Markham Clewell; grandchildren, Eric Nowland, Megan Calkin Ashmore, and Brent Calkin; great grandchildren, Braxton and Kori Ashmore; brother, Hollis Nowland and wife Louise; stepbrother, David Love and wife June, and numerous other special relatives and extended family. He was preceded in death by his parents; wife, Vera Mae Clark Nowland; daughter, Barbara Nowland Calkin; and special companion, Beulah Dean Morton. Mel was known by all who knew him as the kindest, sweetest, and most generous man. He was a devoted caretaker to Vera Mae for 42 years, as she was afflicted with crippling rheumatoid arthritis. This gave him a special sensitivity and desire to help others with physical challenges. He spent the majority of his adult life enriching the lives of many individuals. He worked with the Children's Center in Bethany designing and repairing special adaptive toys and training aids. He also refurbished donated computers for schools, special needs groups, and various children's agencies. He set up the telecommunications and tote boards for the MDA and CMN telethons. He has received numerous awards and accolades through the years for his volunteer work, including the KOCO-TV Five Who Care Award in 1986 for recognition of outstanding public service. Mel was a true humanitarian who made it his life's work to improve the lives of others. This special man will be dearly missed by his family and friends. A memorial service celebrating his life will be held 2:00 PM, Monday, May 2 at Buchanan Funeral Service.