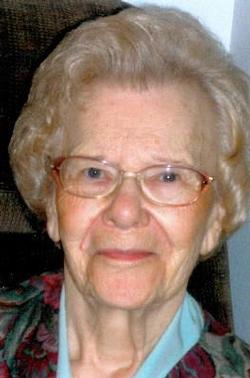 Minnie L. (Classen) Byrd went to the bosom of Abraham on April 28, 2011. She was born on June 1, 1922 to Isaac T. and Margaret R. Classen. She graduated from Meade, KS High School, class of 1942. She entered the army cadet nurses training program and graduated at St. Anthony Hospital in Dodge City, KS as an RN in 1945. She was director of nursing at the Fowler, KS Hospital, the first hospital in Meade County. She worked for Deaconess Hospital many years, in the nursery. She was preceded in death by her parents and a sister, Katie. She married Lloyd C. Byrd on August 4, 1949 in Dodge City, KS. She is survived by husband, Lloyd; 2 daughters, Kaie Stewart and Grace James and her husband Michael; son-in-law Chuck Stewart; Grandchildren, Erin and husband Johnny Moore, J. Stewart and wife Laurie, Joshua James and fiance&#39; Janice Langdon, Jacqueline Wicker and husband David; great grandchildren, Kendall, Reese, & Ava Stewart, Laine Moore and Kaden James; 3 brothers, Isaac Classen Jr., Wilmer Classen and Ernie Classen; 1 sister, Bertha Johnson. Her life was given in service to God and others. She was a Sunday School teacher for decades. Her delight was to be with her children, grandchildren, and great grandchildren. Special thanks to all of Minnie&#39;s caregivers from Deaconess Home Health Care, Grace Living Center, Good Shepherd Hospice and Emerald Square. Visitation will be Friday, May 6, 2011 from 9 AM until 8 PM at the funeral home. Services to celebrate her life will be Saturday, May 7, 2011 at Williams Memorial Church of the Nazarene at 2 p.m. with burial to follow in Bethany Cemetery. She leaves behind a legacy of holiness for any and all to follow.